The Experience work at the Record Plant in New York City. During the session, the group creates the basic track for “House Burning Down” and complete the recordings of “Gypsy Eyes” with take 5 being marked as ‘complete.’ The group also revisit “Tax Free” with Hendrix playing his guitar through a Leslie speaker on two of the takes; the later being marked as ‘use.’

Returning once again to the Record Plant, the Experience prepare a rough mix of “House Burning Down” but later mark it ‘Don’t Use’ and discard it. Overdubs, including Jimi’s lead guitar part for Redding’s “Little Miss Strange” are completed, as is the final mix of the track.

The Experience complete rough mixes for “Three Little Bears,” “Voodoo Chile,” and “Long Hot Summer Night” during sessions at the Record Plant. Jimi also returned to the April 22 recordings of “1983 (A Merman I Should Turn To Be)” by adding a series of new recordings that were later added as edit sections to create a single, unified master. With Hendrix taking the music in his own direction, Chas Chandler stepped down as the producer for the Electric Ladyland project. “Both I and the group were exhausted,” explained Chandler in an interview with John McDermott for the book Jimi Hendrix Sessions. “I had spent three years with the Animals, and the next day I was working with Hendrix. I had put in as much time on the job as Hendrix, Mitchell, and Redding – plus my time with the Animals. The last thing I wanted to be doing was fighting with Jimi in the studio and then (Michael) Jeffrey in the office. I just walked away.” In a separate session, also at the Record Plant, Noel Redding worked recorded “How Can I Live” with engineer Gary Kellgren.

The Experience completed an overdub and mixdown session for “Gypsy Eyes” at the Record Plant. 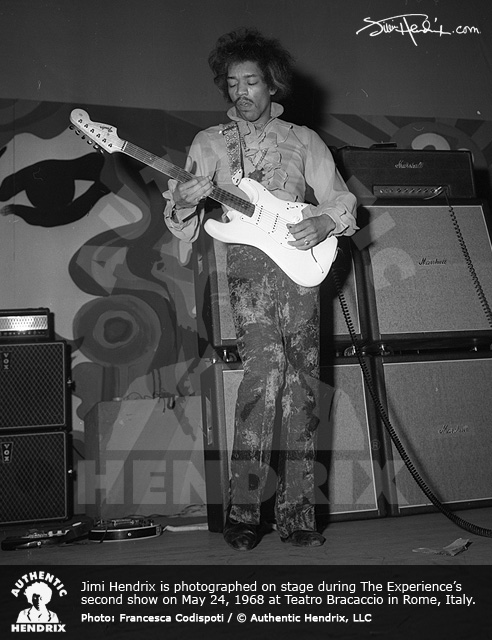 The Experience are interviewed and photographed by Swiss reporter, Winnie Land and her husband at the Fleming Hotel. The interview is printed in the May 30, 1968 edition of Blick. Two additional performances are given at Teatro Brancaccio with the same supporting acts as the previous night. Afterwards, the Experience head to the Titan Club.