Widely recognized as one of the most creative and influential musicians of the 20th century, Jimi Hendrix pioneered the explosive possibilities of the electric guitar. Hendrix’s innovative style of combining fuzz, feedback and controlled distortion created a new musical form. Because he was unable to read or write music, it is nothing short of remarkable that Jimi Hendrix’s meteoric rise in the music took place in just four short years. His musical language continues to influence a host of modern musicians, from George Clinton to Miles Davis, and Steve Vai to Jonny Lang.

Jimi Hendrix, born Johnny Allen Hendrix at 10:15 a.m. on November 27, 1942, at Seattle’s King County Hospital, was later renamed James Marshall by his father, James “Al” Hendrix. Young Jimmy (as he was referred to at the time) took an interest in music, drawing influence from virtually every major artist at the time, including B.B. King, Muddy Waters, Howlin’ Wolf, Buddy Holly, and Robert Johnson. Entirely self-taught, Jimmy’s inability to read music made him concentrate even harder on the music he heard.

Al took notice of Jimmy’s interest in the guitar, recalling, “I used to have Jimmy clean up the bedroom all the time while I was gone, and when I would come home I would find a lot of broom straws around the foot of the bed. I’d say to him, `Well didn’t you sweep up the floor?’ and he’d say, `Oh yeah,’ he did. But I’d find out later that he used to be sitting at the end of the bed there and strumming the broom like he was playing a guitar.” Al found an old one-string ukulele, which he gave to Jimmy to play a huge improvement over the broom.
By the summer of 1958, Al had purchased Jimmy a five-dollar, second-hand acoustic guitar from one of his friends. Shortly thereafter, Jimmy joined his first band, The Velvetones. After a three-month stint with the group, Jimmy left to pursue his own interests. The following summer, Al purchased Jimmy his first electric guitar, a Supro Ozark 1560S; Jimi used it when he joined The Rocking Kings.

In 1961, Jimmy left home to enlist in the United States Army and in November 1962 earned the right to wear the “Screaming Eagles” patch for the paratroop division. While stationed at Fort Campbell, Kentucky, Jimmy formed The King Casuals with bassist Billy Cox. After being discharged due to an injury he received during a parachute jump, Jimmy began working as a session guitarist under the name Jimmy James. By the end of 1965, Jimmy had played with several marquee acts, including Ike and Tina Turner, Sam Cooke, the Isley Brothers, and Little Richard. Jimmy parted ways with Little Richard to form his own band, Jimmy James and the Blue Flames, shedding the role of back-line guitarist for the spotlight of lead guitar.

Throughout the latter half of 1965, and into the first part of 1966, Jimmy played the rounds of smaller venues throughout Greenwich Village, catching up with Animals’ bassist Chas Chandler during a July performance at Caf‚ Wha? Chandler was impressed with Jimmy’s performance and returned again in September 1966 to sign Hendrix to an agreement that would have him move to London to form a new band.

The Experience’s first single, “Hey Joe,” spent ten weeks on the UK charts, topping out at spot No. 6 in early 1967. The debut single was quickly followed by the release of a full-length album Are You Experienced, a psychedelic musical compilation featuring anthems of a generation. Are You Experienced has remained one of the most popular rock albums of all time, featuring tracks like “Purple Haze,” “The Wind Cries Mary,” “Foxey Lady,” “Fire,” and “Are You Experienced?”

Although Hendrix experienced overwhelming success in Britain, it wasn’t until he returned to America in June 1967 that he ignited the crowd at the Monterey International Pop Festival with his incendiary performance of “Wild Thing.” Literally overnight, The Jimi Hendrix Experience became one of most popular and highest grossing touring acts in the world.

Hendrix followed Are You Experienced with Axis: Bold As Love. By 1968, Hendrix had taken greater control over the direction of his music; he spent considerable time working the consoles in the studio, with each turn of a knob or flick of the switch bringing clarity to his vision. 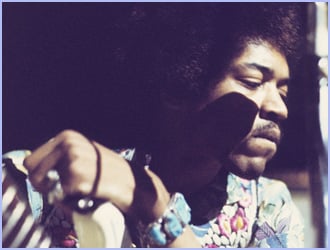 Back in America, Jimi Hendrix built his own recording studio, Electric Lady Studios in New York City. The name of this project became the basis for his most demanding musical release, a two LP collection, Electric Ladyland. Throughout 1968, the demands of touring and studio work took its toll on the group and in 1969 the Experience disbanded.

The summer of 1969 brought emotional and musical growth to Jimi Hendrix. In playing the Woodstock Music & Art Fair in August 1969, Jimi joined forces with an eclectic ensemble called Gypsy Sun & Rainbows featuring Jimi Hendrix, Mitch Mitchell, Billy Cox, Juma Sultan, and Jerry Velez. The Woodstock performance was highlighted by the renegade version of “Star Spangled Banner,” which brought the mud-soaked audience to a frenzy.
Nineteen sixty-nine also brought about a new and defining collaboration featuring Jimi Hendrix on guitar, bassist Billy Cox and Electric Flag drummer Buddy Miles. Performing as the Band of Gypsys, this trio launched a series of four New Year’s performances on December 31, 1969 and January 1, 1970. Highlights from these performances were compiled and later released on the quintessential Band of Gypsys album in mid-1970 and the expanded Hendrix: Live At The Fillmore East in 1999.

As 1970 progressed, Jimi brought back drummer Mitch Mitchell to the group and together with Billy Cox on bass, this new trio once again formed The Jimi Hendrix Experience. In the studio, the group recorded several tracks for another two LP set, tentatively titled First Rays Of The New Rising Sun. Unfortunately, Hendrix was unable to see this musical vision through to completion due to his hectic worldwide touring schedules, then tragic death on September 18, 1970. Fortunately, the recordings Hendrix slated for release on the album were finally issued through the support of his family and original studio engineer Eddie Kramer on the 1997 release First Rays Of The New Rising Sun.

From demo recordings to finished masters, Jimi Hendrix generated an amazing collection of songs over the course of his short career. The music of Jimi Hendrix embraced the influences of blues, ballads, rock, R&B, and jazz a collection of styles that continue to make Hendrix one of the most popular figures in the history of rock music.