Looking to get something new to market following their debut “Hey Joe,” Chas Chandler brought The Experience to DeLane Lea Studios in London to commence work on their next songs. This session included the basic track for “Purple Haze,” which was recorded in merely four hours. Additional recordings including “The Wind Cries Mary,” “51st Anniversary,” “The Wind Cries Mary” and “Burning Of The Midnight Lamp” were also completed.

Jimi Hendrix is interviewed by Mike Legerwood for the January 28th edition of Disc & Music Echo.

The Jimi Hendrix Experience perform at The Speakeasy. 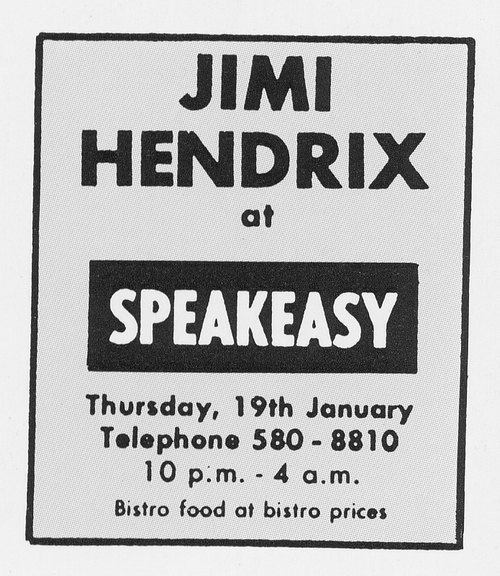 Jimi Hendrix is interviewed for the January 28th edition of Melody Maker. 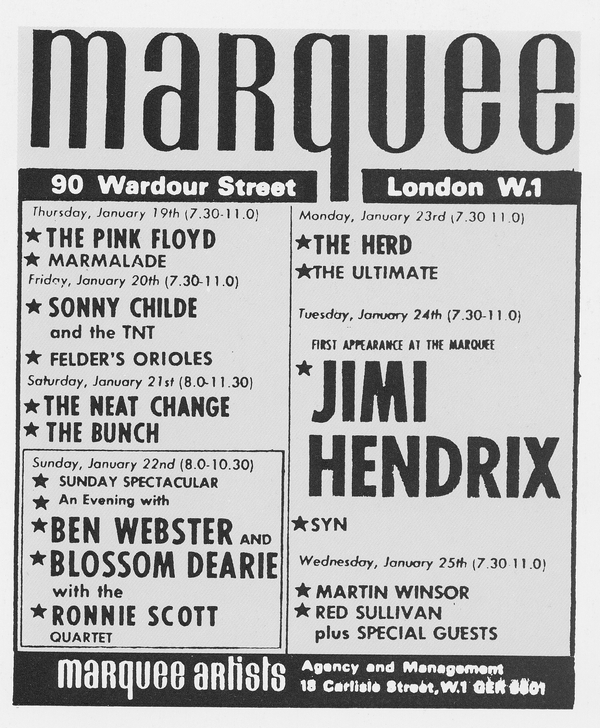 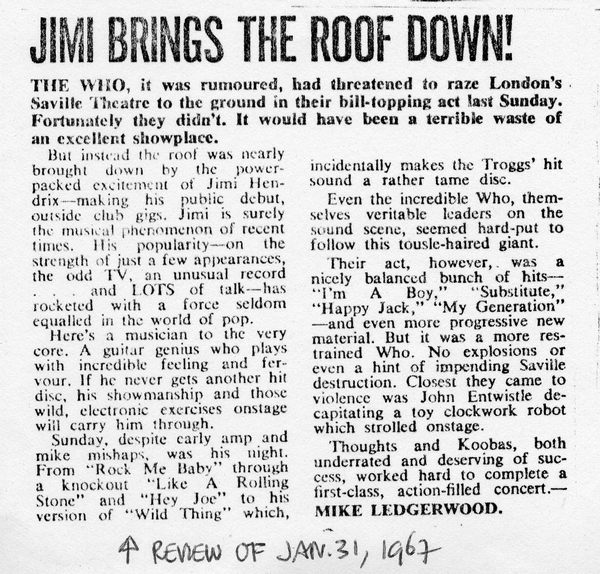 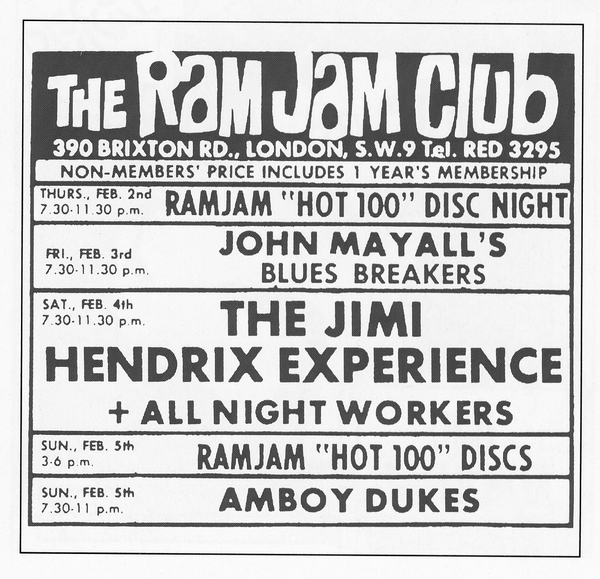 Jimi Hendrix attends The Cream concert at the Saville Theatre.

Jimi Hendrix is interviewed by Steve Barker for an article in Debris, the student newspaper for West One.

Photographer Bernard Wagner completes a photo session with Jimi Hendrix outside of his apartment at 34 Montagu Square on Marylebone.

Jimi Hendrix is interviewed by Alain Dister at the Anim management office on Gerrard Street.

The Experience perform at the Blarney Club on Tottenham Court Road in London. UFO Club was founded by John Hopkins and Joe Coyd in an Irish dance hall called the “Blarney Club” in the basement of 31 Totenham Court Road. After its opening in December 23, 1966, the club gained considerable recognition as ‘ground zero’ for the underground movement and the first psychedelic nightclub in England. It regularly played host to bands like Pink Floyd.

The Experience head back to De Lane Lea Studios to continue work on their debut album. Recordings this evening focused on “I Don’t Live Today,” and by the session’s end, Chas Chandler had a working master in hand.
Tape Log: I Don’t Live Today

The Experience are interviewed at the Anim management offices for a March 11th issue of New Musical Express.

The Experience are invited to the BBC Studios to perform “Hey Joe” live on the program Parade Of The Pops.
Set List: Hey Joe

Jimi Hendrix signs a US record contract with Warner Bros.

Jimi Hendrix is interviewed by Klaes Borling of Swedish Radio which is broadcast on April 19th.

During the Track Records Launch Party, Jimi Hendrix is interviewed by Beat Instrumental. Eric Clapton who is also in attendance sits down and joins Hendrix in the interview.

The Jimi Hendrix Experience are interviewed by Keith Altham for an April 15th article in New Musical Express.

The Jimi Hendrix Experience kick off their first UK Tour as part of a month-long packaged tour featuring The Walker Brothers, Cat Stevens, Engelbert Humperdinck, The Californians, The Quotations, and MC Nick Jones. The first night featured The Experience performing two-sets. Hendrix managed to seal the spotlight on this night, as he lit fire to his guitar during “Fire.” “It was a strange situation, ” explains music reviewer Keith Altham. “because it took him a little while to get it alight. He was having to dodge behind the amplifiers on the stage with a box of matches and it wasn’t going up. Eventually, he did get it going and it sort of took off quite spectacularly. The security guy in the wings was going bananas and trying to rush onstage with a fire extinguisher. Eventually, he did and managed to spray the compere [emcee], we was not too amused. When we came back to the dressing room afterwards all hell broke loose.” “The security guy said, ‘You’ll never work in this circuit again! He’ll never play again at any of these theatres. How dare he do something like that? He could have burned the place down. What did he mean by swinging it around his head?’ Jimi said, ‘Well, I was trying to put it out.'” It was performance stunts like this that quickly earned Hendrix the moniker “The Black Elvis” and “Wild Man of Borneo.”
Set List: (second show / partial) Foxey Lady // Can You See Me / Hey Joe // Purple Haze // Fire 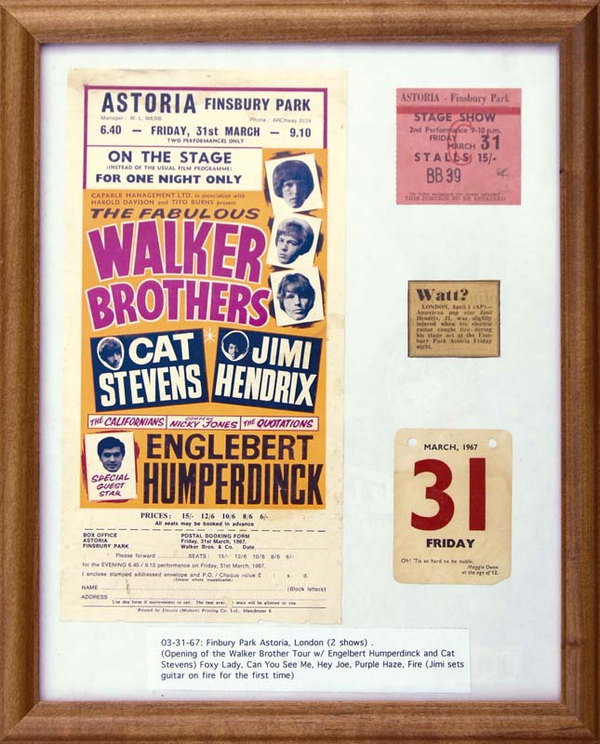 The Experience fly from Zurich, Switzerland to London, England.

The Experience travel to London, England.

Jimi sits for an interview with reporter Jon King at his London apartment on Brook Street.

Chris Welch interviews Hendrix for the January 11th edition of the UK music publication Melody Maker. He also grants an interview to Tony Norman for the January edition of Top Pops magazine. Studio 4, BBC Television Center, London, England Happening For Lulu Voodoo Child (Slight Return) Hey Joe Sunshine Of Your Love Jimi gave one of his most memorable performances on this day. He performed “Voodoo Child (Slight Return)” and an unforgettable medley of “Hey Joe” and Cream’s “Sunshine Of Your Love”. Partway through “Hey Joe”, Hendrix came to a stop and launched into “Sunshine Of Your Love,” dedicating the soon to the recently disbanded Cream. In 1998, this performance was included in its entirety as part of the double CD BBC Sessions.

January 5-6, 1969 Polydor Studios London, England It is believed that Hendrix contributed a lead guitar overdub to the Eire Apparent’s “Rock ‘n’ Roll Band” on either the 5th or 6th of January. The engineer for the session was Carlos Olms. 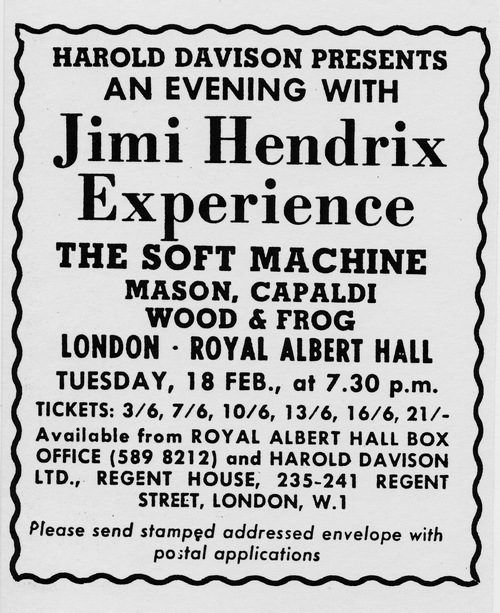 Olympic Studios London, England Hendrix attends but does not participate in a recording session for the group Glass Menagerie. Chas Chandler is the Producer for the session.

London, England Jimi sat in for a jam session with Traffic members Dave Mason and Jim Capaldi at the Speakeasy in London.

While in London, Jimi heads to The Revolution where he attends a performance by Rubber Duck.

Hendrix and Stephen Stills jam at the famed London nightspot The Speakeasy.