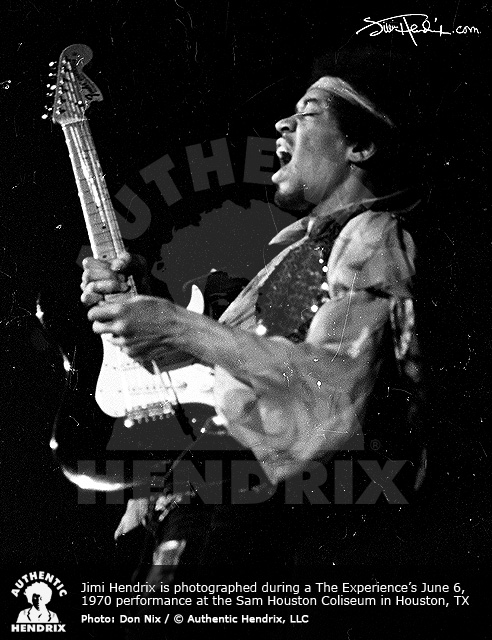 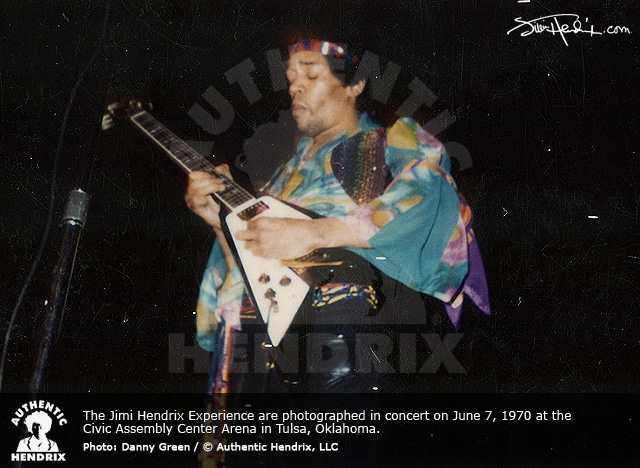 The Jimi Hendrix Experience perform at the Mid-South Coliseum in Memphis, TN.

Track Records releases Band Of Gypsys (2406 002) in the UK. Just like its American predecessor, Band Of Gypsys features “Who Knows,” “Machine Gun,” “Changes,” “Power To Love,” “Message To Love,” and “We Gotta Live Together.”

Jimi holds his first recording session in the new Electric Lady Studios at 52 West 8th Street in the heart of Greenwich Village. Hendrix invites his friends Steve Winwood and Chris Wood from Traffic into the studio where they quickly break into an impromptu jam session. With Mitch Mitchell unavailable Eddie Kramer volunteered Dave Palmer to sit in behind the drums for the session. As the night progressed, Jimi was able to coax Wood and Winwood into providing some backing vocals on ”Ezy Rider” which Jimi was carrying over from his stints at the Record Plant. Also put to tape on this night were renditions of Traffic’s own “Pearl Queen” and Winwood’s own “Rhythm Ace.” Work soon progressed to Jimi’s composition, “Valleys Of Neptune” before segueing into a loose untitled jazz-focused jam and later a track titled “Slow Blues.” Jenny Dean, a mutual friend of Jimi and Winwood, offered backing vocals on the later recording.

Back at Electric Lady Jimi records the master takes of “Night Bird Flying” and “Straight Ahead.” Joined by percussionist Juma Sultan these sessions proved to be among his most productive in the post-Electric Ladyland days. He follows these recordings with takes of “Beginnings,” “Freedom,” and a loose recording simply titled “Messing Around.”

Returning once again to Electric Lady, Hendrix enthusiastically kicked off the session right where the prior night’s left off. In visiting “Straight Ahead” Hendrix, Billy Cox, and Mitch Mitchell concentrated on forming a new master take of the song. The trio then moves to recordings for “Astro Man.” Feeling playful, Jimi brings the session to a quick halt before yelling for tape machine to start recording. Assured that the tapes are rolling Jimi breaks into a high octave vocal take of “Drifter’s Escape.”

The Experience perform two shows at the Civic Auditorium in Albuquerque, NM.

A performance at the Swing Auditorium in San Bernardino, CA includes “All Along The Watchtower,” “Room Full Of Mirrors,” “Machine Gun,” “Message To Love,” “Hear My Train A Comin’,” “Foxey Lady,” “Hey Joe,” “Purple Haze,” and “Voodoo Child (Slight Return).”

With support from Ballin’ Jack and Grin, The Experience perform “Machine Gun,” “Purple Haze,” and “Foxey Lady” at the outdoor venue. The show is reportedly cut short (roughly 45 minutes) due to dense fog that enveloped the Ventura County Fairgrounds in Ventura, CA.

The Experience perform at Mammoth Gardens in Denver, CO.

Returning to Electric Lady Studios after a series of West Coast tour dates, Hendrix jumped right back into a series of strong recordings kicked off by a playful series of takes of “Astro Man.” As the night progressed Hendrix guided the group through recordings of “Rollin’ Stone,” “In From The Storm,” and a rendition of Cream’s “Politician.” Hendrix then tore into a 26-minute untitled jam before breaking into “Beginnings,” “Hey Baby (New Rising Sun),” “Straight Ahead,” “Midnight Lightning,” and finally “Freedom.”

Building on the momentum of the previous night’s session the group, now joined by Juma Sultan, revisit “Astro Man” before debuting the new ballad, “Drifting.” The session also included work on “Freedom” and “Cherokee Mist.”

Hendrix returned to Electric Lady where he revisited a number of previously recorded compositions for overdubbing. Work on this night included visits to “Message To Love,” “Earth Blues,“ “Steeping Stone,” Valleys Of Neptune,” and a rough demo of “Heaven Has No Sorrow.”

The Experience head back to the East Coast where they perform, with supporting acts The Illusion and Cactus at the Boston Gardens in Boston, MA. The Experience’s performance includes “Stone Free,” “Lover Man,” “Red House,” “Freedom,” “Foxey Lady,” “Purple Haze,” “Star Spangled Banner,” “All Along The Watchtower,” “Message To Love,” “Fire,” “Spanish Castle Magic,” and “Voodoo Child (Slight Return).” Jimi Hendrix is photographed in full flight during The Experience’s incendiary performance at the Boston Garden in Boston, Massachusetts on June 27, 1970. Photo: Joseph Cestaro / © Authentic Hendrix, LLC 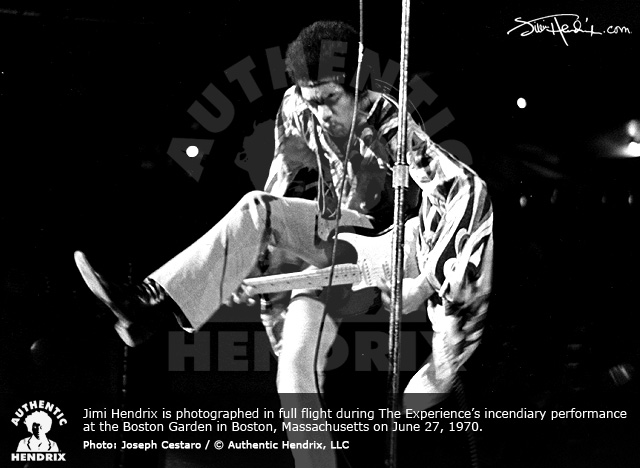