Hendrix jams with Al Sykes and John Mayall at Klooks Kleek in the Railway Hotel in Hampstead.

The band flies to Gothenburg, Sweden. Gosta Hansson interviews Hendrix for Goteborgs-Tidningen. The interview is published the following day. The Experience visit the Klubb Karl in Gothenburg.

In the early morning hours, Hendrix reportedly becomes angry when fans try to get into his room at the Hotel Opalen. Police in Gothenberg arrest him for smashing a plate glass window. He is taken to a local hospital, where he receives stitches in his right hand. That night, the group plays at Lorensbergs Cirkus in Gothenburg. Mecki Mark Men and Baby Grandmothers are also on the bill. The first show set list is comprised of: “Foxy Lady,” “The Wind Cries Mary,” “Fire,” “Hey Joe,” “Come On (Part One),” and “Purple Haze.” For the second show, the band plays: “Sgt. Pepper’s Lonely Hearts Club Band,” “Fire,” “Hey Joe,” “Foxy Lady,” “The Wind Cries Mary,” “Catfish Blues,” and “Purple Haze.” Oscar Hedlund interviews Jimi Hendrix and Gerry Stickells for Dagens Nyheter. The interview is published the following day. 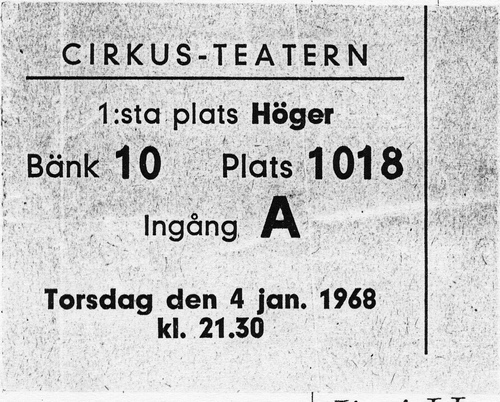 Hendrix is interviewed for a January 6 Expressen story. Along with Mecki Mark Men and Baby Grandmothers, The Experience play the Sportshallen. Because of a sore throat, the band plays for only 35 minutes.

The band flies to Copenhagen, where they are recorded for TV and interviewed by Carsten Grolin for Ekstra Bladet. The interview is published January 8.

Hendrix checks in at Gothenburg police headquarters. He must report there every day until January 15.

Hendrix is interviewed for a January 12 Expressen story.

Jimi Hendrix attends a party at the Apple offices on Saville Row, where he is interviewed for the London Herald. The party is held to celebrate Apple’s signing of The Grapefruit. Members of the Beatles, Brian Jones and Kathy Etchingham also attend.

The band is photographed for Top Pop magazine. Under the direction of Paul McCartney, Hendrix records tracks for the self-titled, McGough and McGear (EMI Parlophone, PCS 7047, 1968) album at DeLane Lea Studios.

The Experience returns to Olympic Studios to record “All Along The Watchtower,” which features Dave Mason on 12-string acoustic guitar and Brian Jones on percussion. The session started with Jones contributing on piano, but these recordings were not released.

Jimi joins Sam Gopal’s Dream on the stage at The Speakeasy.

Richard Robinson interviews Hendrix and Noel Redding for Hullabaloo at the Upper Berkeley Street flat. The interview is published in May.

The band records “Tax Free” and “Little One” at Olympic Studios.

“Mushy Name” and “Tax Free” are recorded at Olympic Studios.

The Experience fly to New York, where they hold a news conference at the Pan Am Building’s Copter Club. Hendrix is interviewed by Jay Ruby for Jazz and Pop (July 1968); Michael Rosenbaum for Crawdaddy (May 1968); Don Paulsen for Hit Parader (July 1968); Al Aronowitz for the New York Post (February 2); and Life magazine (April 1).