Woodstock Music & Art Festival, Bethel, New York Set List: Message To Love Hear My Train A Comin’ Spanish Castle Magic, Red House Mastermind [Larry Lee] Lover Man Foxey Lady Jam Back At The House Izabella Gypsy Woman [Larry Lee] Fire Voodoo Child (Slight Return) Star Spangled Banner Purple Haze Woodstock Improvisation Villanova Junction Blues Hey Joe Beginning in July 1969, Jimi relocated to Shokan, a quiet upstate New York village near Woodstock for the balance of the summer. Here Hendrix was accorded sufficient time to relax and refine his new musical direction. In time, the rustic summer retreat served to rejuvenate his creative spirit. “Jimi was taking a kind of vacation out in the country, trying to get his act together,” explains Eddie Kramer. “It was all part of his developmental process, wood shedding if you want to call it that. With Billy Cox in tow, Jimi revisited his Tennessee roots once more, reaching back to guitarist Larry Lee, another old friend and veteran of the chitlin’ circuit. Where Cox had been actively involved in various music projects prior to heeding Jimi’s call, Lee had just returned from a stint in Vietnam. Also invited to Hendrix’s vacation retreat were percussionists Jerry Velez and Juma Sultan. Hendrix met Velez at Steve Paul’s Scene Club prior to the break up of the Experience. “I had just finished jamming with The McCoys,” explains Velez. “When I walked over to my table, Jimi and his entourage were sitting behind me. A little later, I joined the band on stage again for a few more tunes. When I came back to sit down, he leaned over and said, ‘Listen, I’m recording this jam over at the studio tonight. We’ll be starting around four, after this thing ends tonight. Do you want to come down and jam?’ I said sure. I went over that night and jammed with Jimi and Buddy Miles, and we seemed to hit it off.” Juma Sultan was actively involved with the Aboriginal Music Society in Woodstock, New York, and was a highly respected percussionist who would performed regularly at the Tinker Street Cinema. Both were received well during their jam’s back at the house and were invited to join Hendrix’s expanded ensemble, Gypsy Sun and Rainbows. In the weeks prior to the Woodstock festival, Jimi jammed at his rented home, as well as the Tinker Street Cinema in downtown Woodstock. Making its first and only official public appearance, Hendrix’s expanded ensemble Gypsy Sun and Rainbows performs at the Woodstock Music & Art Festival in Bethel, New York. Hendrix takes to the Woodstock stage on Monday morning with the support of Mitch Mitchell (drums), Billy Cox (bass & backing vocals), Larry Lee (rhythm guitar), Juma Sultan (percussion), and Jerry Velez (percussion). His extended set includes his magnificent rendition of the “Star Spangled Banner”. At some point after his performance, Hendrix authors “500,000 Halos” which he describes as an ‘unfinished sketch of (the) Woodstock Festival.’ Jimi Hendrix and his new ensemble group, Gypsy Sun & Rainbows, headline the Woodstock Art & Music Fair on Monday, August 18, 1969. Photo: Allan Koss / © Authentic Hendrix, LLC 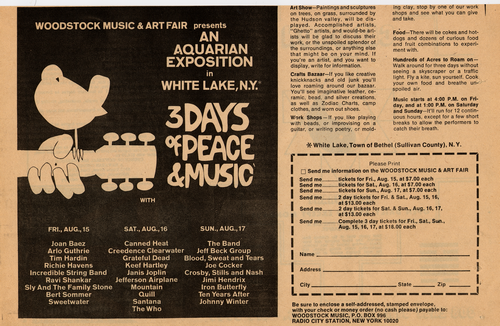 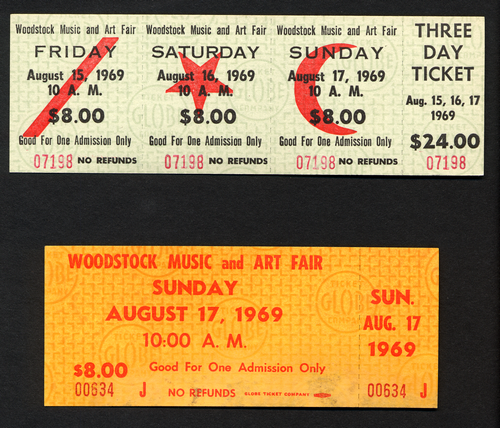 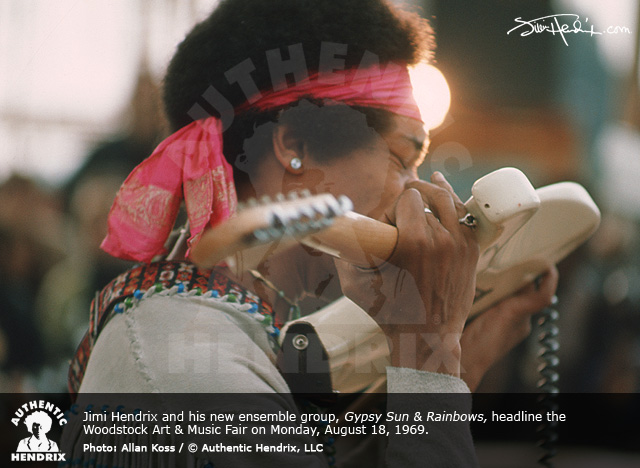