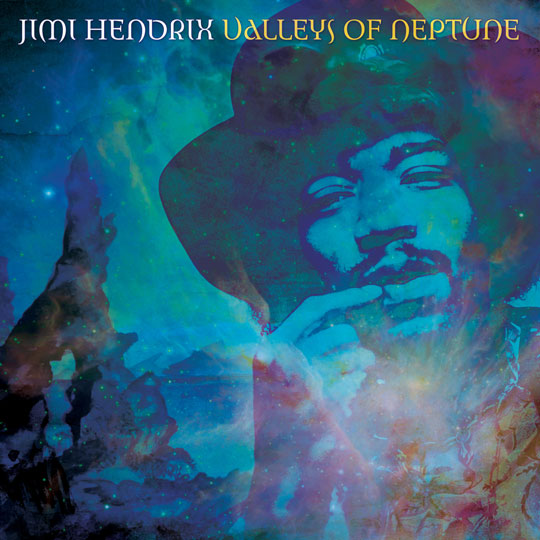 Are You Experienced, Axis: Bold As Love, Electric
Ladyland, and First Rays of the New Rising
Sun — Among America’s
Top 100 Albums

Valleys
of Neptune, the long-awaited
album of previously unavailable Jimi Hendrix studio recordings, has debuted on
the Billboard 200 best-selling albums chart at #4, while four additional
Hendrix catalog titles — Are
You Experienced (#44),  Electric Ladyland (#60),  First Rays of the New Rising Sun (#63), and Axis: Bold As Love (#67) — have returned to the Billboard 200
four decades after their original release dates, a testimony to the enduring
vitality and importance of the trailblazing artist-guitarist-performer.

A newly curated
album of 12 fully realized studio cuts, more than a hour’s worth of previously
unheard Jimi Hendrix music, Valleys
of Neptune, the centerpiece
of the historic 2010 Jimi Hendrix Catalog Project, rocketed to #1 on Amazon in
anticipation of its release.  The album debuted at #1 at Barnes & Noble,
B&N.com, Borders, J&R Music World, Newbury Comics, Fred Meyer, Easy
Street (Seattle), Bull Moose;  #2 at Amoeba and Music Monitor; #3 at Target and
Best Buy.  Approximately 20% of first week’s sales have been in the digital
realm.

“The
consumer response to Valleys
of Neptune and the Jimi
Hendrix catalog has been phenomenal,” said Adam Block, Senior Vice
President and General Manager, Legacy Recordings. “It reminds us that his
spirit still speaks to so many and inspires and motivates fans of all
ages.”

“It’s
really gratifying to know that my brother’s music is still playing
as vital a role in the culture today as it did when he recorded these
tracks,” said Janie Hendrix, CEO of Experience Hendrix LLC.
“The acceptance of Valleys
of Neptune and the classic
catalog albums underscores the fact that his innovation and creative force are
truly transcendent.”

Experience
Hendrix LLC and Legacy Recordings are celebrating the release of Valleys of Neptune and the launch of the 2010 Jimi
Hendrix catalog campaign with an array of online activity.  The
official Jimi Hendrix website, JimiHendrix.com has been redesigned for the catalog
relaunch and will contain exclusive content with new features being added
throughout the year.

Debuting today
on JimiHendrix.com is the Jimi Hendrix Messenger, JimiMessaging.com, an interactive messaging tool that
enables new and experienced fans to send messages to friends and family from
their front row seats at Jimi’s historic 1970 performance from the Isle of
Wight Festival.

Acclaimed
British film director Julien Temple (“The Filth & the Fury,”
“Absolute Beginners,” “Joe Strummer: The Future is
Unwritten”) lensed a visionary music
clip for “Bleeding Heart,”
Jimi’s cover of an Elmore James blues, placing Jimi on-stage in a surrealistic
Glastonbury Faire of the mind.  “I saw Jimi’s first showcase gig in London
and I never thought I would work with him,” said Julien Temple.
“Making this video felt like completing a circle.”  The Julien
Temple-directed “Bleeding Heart” and the music video for Valleys of
Neptune’s
title track may be seen
on the dedicated Jimi Hendrix VEVO
channel on YouTube.

Centered around
tracks recorded during a pivotal and turbulent four-month period in 1969, Valleys of Neptune unveils the original Jimi Hendrix
Experience’s final studio recordings, as the group lays down the foundation for
its follow-up to Electric
Ladyland, alongside the
guitar superhero’s first sessions with bassist Billy Cox, an old army buddy
he’d recruited into his new ensemble.

Valleys
of Neptune provides an
essential, compelling, and up-til-now largely unheard listen to what Jimi
Hendrix was up to musically in the critical period between the release of Electric Ladyland in October 1968 and the 1970 opening of
his own Electric Lady Studios, the state of the art facility in Greenwich
Village where he would begin his final project, the ambitious double album First Rays of the New Rising Sun.

The initial
press response to Valleys
of Neptune has been
rhapsodic on both sides of the Atlantic. Jimi Hendrix will be the cover story
on Rolling Stone’s issue #1101 (April 1, 2010).:

“… a
glimpse of the guitarist extending his reach beyond the Experience trio, it’s
thrilling. ” – ROLLING STONE

“’Valleys of Neptune’ has a raw, muscular sound… This may
be as close to a new Hendrix album as his fans will ever get.” – WALL
STREET JOURNAL

“VON is
satisfying and illuminating…”  – BILLBOARD

“Valleys of Neptune is legit – not quite a lost album, but
darn near close in that it compiles 12 previously unreleased studio recordings,
most from a key 1969 phase in the guitarist’s career.” – CHICAGO TRIBUNE

“….treats
us to a locked-in-and-grooving Experience – plus, we catch some glimmers of
where Jimi might have headed in the years to come. On the whole, the album
feels right…” – JAMBANDS

“No filler
tracks or incomplete cuts are included here; every minute has been carefully
vetted and listeners will show their appreciation of that effort by giving Valleys of Neptune the repeat spins it merits.” – antimusic.com

“Valleys of Neptune sounds fantastic, and yer man is on top
of his playing game pretty much from start to finish” – WORD (April 2010)

“James
Mitchell Hendrix continues to weave his extraordinary spell, thanks to the
persistence of his sister Janie and Experience Hendrix company” – SUNDAY
EXPRESS (March 7, 2010)

“This marks
a significant addition from one of the most important people in music and poses
the question: why did no one release this sooner?” – SHORTLIST (March 4,
2010)

“A
righteous slab of blues and funk from the greatest guitarist, like ever.
Sold!” – TOTAL GUITAR (March 2010)

“….it’s
clear that Valleys
of Neptune, centred on the
drifting cosmic pop of its long-lost title track, has been a labour of
love” – Q (April 2010)

Experience Hendrix Tour
2010, the fourth edition
of the biennial concert tour that features an all-star line up of music greats
paying homage to the music and legacy of Jimi Hendrix, is currently
underway with the current run of performances sold-out across the country.

Featured artists
who will be performing music written and inspired by Jimi Hendrix
include some of the best known and most respected artists in contemporary
rock and blues including Joe Satriani, Jonny Lang, Eric Johnson, Kenny
Wayne Shepherd, Brad Whitford (of Aerosmith), Doyle Bramhall II, Ernie Isley,
Living Colour, Double Trouble’s Chris Layton, along with bassist Billy
Cox. Cox, who first befriended Hendrix when the two were in the
101st Airborne Division of U.S. Army, played in both the Jimi Hendrix
Experience and Band of Gypsys and performed with Hendrix at such landmark
festivals as Woodstock and the Isle of Wight. Cox commented, “It’s a
thrill for me to play Jimi’s music for audiences now as it was in the
1960s.”