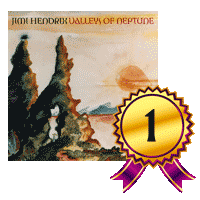 RollingStone.com is reporting that “Valleys Of Neptune,” the lead-single from the forthcoming album of the same name has claimed the Number One spot on the Billboard Singles chart, ahead of artists like Lady Gaga and Sade.

This historic announcement marks Jimi Hendrix’s highest US chart position since 1968’s “All Along The Watchtower” which peaked at #20.