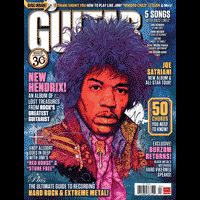 To commemorate the release of Jimi Hendrix’s new album Valleys Of Neptune, the April 2010 edition of Guitar World magazine features a striking illustrated image of Jimi Hendrix on its cover. This issue features an in-depth look at the new Valleys Of Neptune album plus instructional videos featuring Joe Satriani and Andy Aledort who walk you through several of Hendrix’s hit songs.