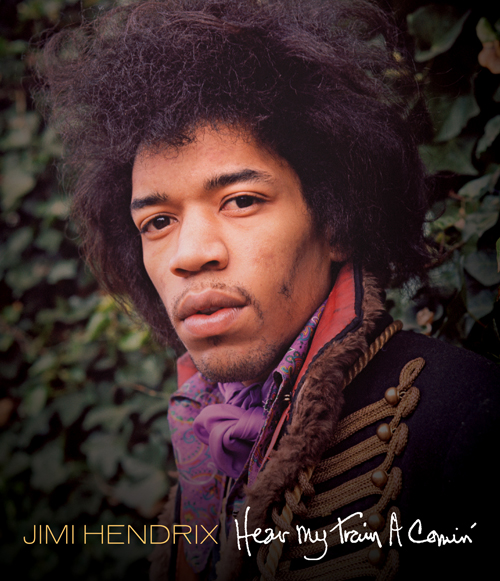 Experience Hendrix LLC and Legacy Recordings, the catalog division of Sony Music Entertainment, will release, on DVD and Blu-ray , the expanded home video edition of the American Masters documentary Jimi Hendrix – Hear My Train A Comin’ https://smarturl.it/JH_Train_amznBR, combined with a host of never-before-released special performance features, on Tuesday, November 5, 2013.

The first ever major rock festival staged on the East Coast, the May 1968 Miami Pop Festival was the first event promoted by Michael Lang—who would organize Woodstock, the biggest pop culture event of the decade, fifteen months later—and Ric O’Barry, who had been the dolphin trainer for the popular television program Flipper. Lang and O’Barry had been inspired by the June 1967 Monterey Pop Festival, the groundbreaking gathering where Jimi Hendrix, making his US debut, famously set fire to his guitar at the conclusion of his performance. Lang staged the festival at Gulfstream Park in Hallandale, Florida, securing the Jimi Hendrix Experience as the headline act for the two-day festival.

Hear My Train A Comin’ unveils previously unseen performance footage and home movies taken by Hendrix and drummer Mitch Mitchell while sourcing an extensive archive of photographs, drawings, family letters and more to provide new insight into the musician’s personality and genius.

A pioneering electric guitarist, Hendrix had only four years of mainstream exposure and recognition, but his influential music and riveting stage presence left an enduring legacy. Hear My Train A Comin’ traces the guitarist’s remarkable journey from his hardscrabble beginnings in Seattle, through his stint as a US Army paratrooper, unknown sideman to R&B stars such as Little Richard, Joey Dee and the Isley Brothers and his discovery and ultimate international stardom.

Presented as part of a year-long celebration around his 70th birthday year–the guitarist was born November 27, 1942–the two-hour Hear My Train A Comin’ tells the definitive story, illustrated by interviews with Hendrix and illuminated with commentary from family, well-known friends and musicians including Paul McCartney, Noel Redding, Mitch Mitchell, Billy Cox, Eddie Kramer, Steve Winwood, Vernon Reid, Billy Gibbons, Dweezil Zappa and Dave Mason as well as revealing glimpses into Jimi and his era from the three women closest to him Linda Keith (the girlfriend who introduced Jimi to future manager Chas Chandler), Faye Pridgeon (who befriended Hendrix in Harlem in the early 1960s) and Colette Mimram (one of the era’s most influential fashion trendsetters who provided inspiration for Hendrix’s signature look and created such memorable stage costumes as the beaded jacket Hendrix famously wore at Woodstock). The film details the meteoric rise of the Experience, the creation of his groundbreaking music, the building of Electric Lady Studios, his state-of-the-art recording facility in Greenwich Village, and concludes with poignant footage from his final performance in Germany in September 1970, just 12 days before his death at age 27.

Janie Hendrix, President and CEO of Experience Hendrix LLC and the sister of Jimi Hendrix commented, “Hear my Train a Comin’ is an in-depth look at the life and legacy of Jimi with his own words as well as the words and memories of those that knew him well and were close to him. His impression on the world through his genius, music and talent continue to magically touch the lives of ensuing generations.”

About WNET
In 2013, WNET is celebrating the 50th Anniversary of THIRTEEN, New York’s flagship public media provider. As the parent company of THIRTEEN and WLIW21 and operator of NJTV, WNET brings quality arts, education and public affairs programming to over 5 million viewers each week. WNET produces and presents such acclaimed PBS series as Nature, Great Performances, American Masters, Need to Know, Charlie Rose and a range of documentaries, children’s programs, and local news and cultural offerings available on air and online. Pioneers in educational programming, WNET has created such groundbreaking series as Get the Math, Oh Noah! and Cyberchase and provides tools for educators that bring compelling content to life in the classroom and at home. WNET highlights the tri-state’s unique culture and diverse communities through NYC-ARTS, Reel 13, NJ Today and MetroFocus, the multi-platform news magazine focusing on the New York region. WNET is also a leader in connecting with viewers on emerging platforms, including the THIRTEEN Explore iPad App where users can stream PBS content for free.