Staying in Hawaii, The Experience travel to Oahu where they perform in The Arena at the Honolulu International Center in Oahu, Hawaii.

Having returned from Hawaii, Jimi quickly jumped back into the studio where further progress could be made on the recordings from July. Tonight’s session included work on overdubs for “Dolly Dagger” and “Freedom.”

With more overdubs required on “Dolly Dagger”, Jimi returned to Electric Lady with Eddie Kramer and Dave Palmer where additional parts for the track were put to tape.

The session kicks off with a short, slow blues jam but is cut short due to a malfunctioning tape machine. When the system is repaired Hendrix begins to work on a series of rough mixes for “Straight Ahead,” “Room Full Of Mirrors,” “Ezy Rider,” “In From The Storm,” “Drifting,” “Angel,” “Belly Button Window,” “Dolly Dagger,” and “Freedom.” French television broadcasts L’Appiche De Monde: Festival Atlanta, which includes Jimi’s performance of “Stone Free” captured during the July 4th celebration in Georgia.

Returning to Electric Lady, Jimi continues to work on rough mixes for “Night Bird Flying,” “Straight Ahead,” “Drifter’s Escape,” “Ezy Rider,” “Come Down Hard On Me,” “Beginnings,” “Cherokee Mist,” “In From The Storm,” “Valleys Of Neptune,” “Astro Man,” and “Belly Button Window” overdubs.

This Electric Lady Studios session was devoted entirely to enhancements on the “Dolly Dagger” master.

Electric Lady Studios officially opens with a grand celebration with Jimi in attendance. Reprise Records issues the LP Historic Performances Recorded At The Monterey International Pop Festival (MS 2029), which features the unique pairing of Jimi Hendrix and Otis Redding from the 1967 event. Hendrix’s involvement on the release came in the form of recordings of “Like A Rolling Stone,” “Rock Me Baby,” “Can You See Me,” and the incendiary “Wild Thing.” This album marked the very last recordings of Jimi Hendrix to be released during his lifetime.

Jimi participates in a series of interviews at his suite at the Londonberry Hotel. Among the interviewees include Gillian Saich (New Musical Express, September 5), Bob Partridge (Record Mirror, September 19), and Norman Joplin (Music Now, September 12). Hendrix applies for a working visa at the Swedish Embassy in London so that he can perform there in the coming weeks. Later that night Jimi is joined by Steven Stills and Billy Cox at The Speakeasy. 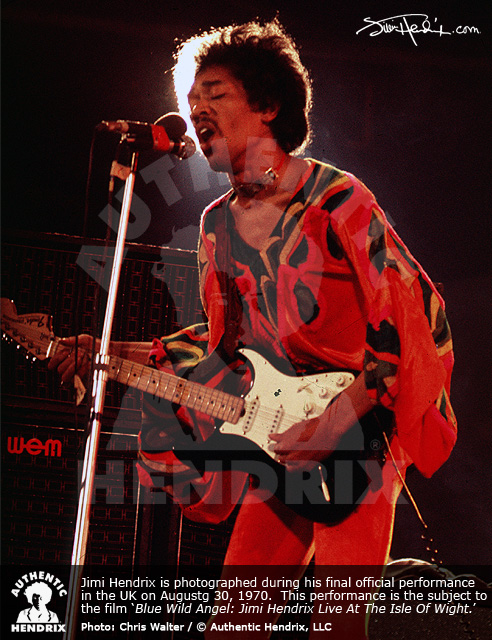