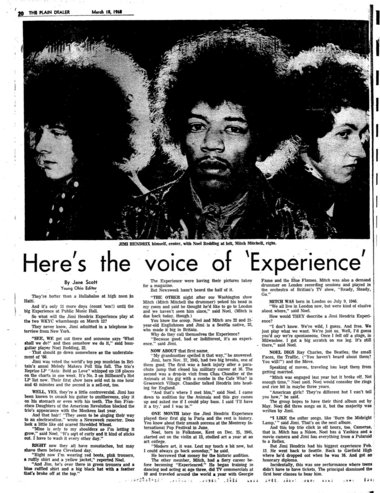 March 27, 1968 Jimi Hendrix Experience is the wildest thing here – Jane Scott “And now “Wild Thing!'” announced Jimi Hendrix. Then the wildness began last night at Public Music Hall. The tall, stove-pipe slim singer in the rainbow-hued jacket and big black hat started making love to his white guitar. He played it with his teeth. He knelt in front of it. He tore off the strings. And he tossed it behind him. “What an experience!” said Chris Bernard, 16, of Rocky River High. “Wow! This was the ultimate!” “GREATEST thing I’ve seen,” said Denny Marek, player with the local Lost Souls group. “After this Motown is dead.” Some thought it was too great. Police pushed four or five boys off the stage. “They swung at me, but I got it,” exulted John Paulisin, 15, Cathedral Latin School, holding up a guitar string. This was Jimi Hendrix, drummer Mitch Mitchell and guitarist Noel Redding of the Jimi Hendrix Experience and it was an experience that many will never forget. WOULD YOU believe a Seattle-born Negro who had to go to England to make it? A left-hander who plays a right-handed Fender guitar backwards? Hendrix is the hottest musical property since the Monkees. He was voted top pop musician in the world in England’s Melody Maker’s Poll last year. “Freakin” funky,” Hendrix described his music yesterday afternoon. At 8:15 p.m. WKYC’s emcee, Chuck Dunaway, stopped the show to ask teens to look under their seats. Three threatening phone calls had been received, but were proved to be a hoax. Hendrix received $18,000 for the two shows but will leave a reported $8,000 here. He bought a blue Corvette with all the trimmings at Blaushild’s Chevrolet earlier yesterday. 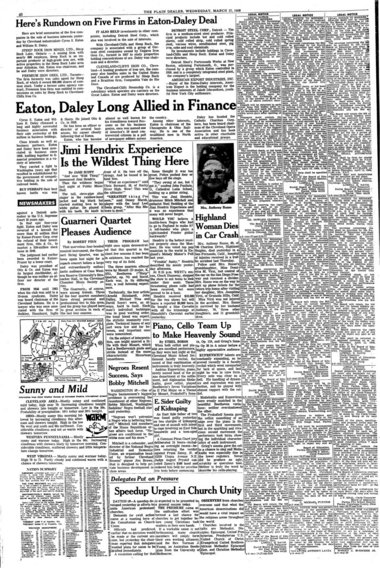