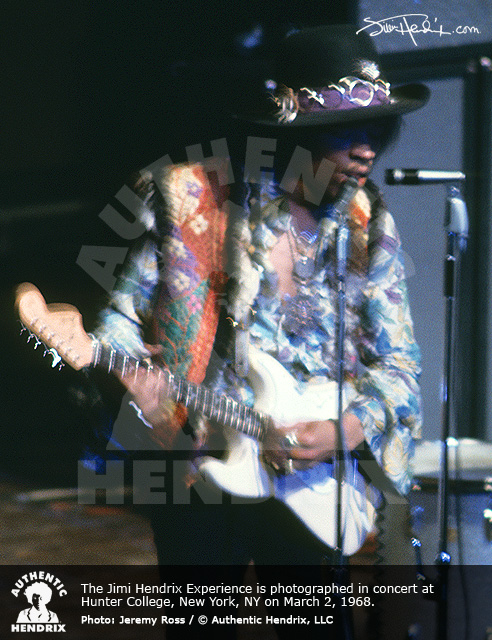 Accompanied on the bill by Dantes, 4 O’Clock Balloon, and Soft Machine, The Experience play Vets Memorial Auditorium in Columbus, Ohio.

Hendrix and friends, including The Doors’ Jim Morrison jam at The Scene Club (301 West 46th Street) in New York. Among the songs performed are “Red House,” “I’m Gonna Leave This Town,” “Bleeding Heart,” “Tomorrow Never Knows,” and “Sunshine Of Your Love.” As Hendrix breaks in the Beatles’ “Tomorrow Never Knows” Morrison falls to the floor and begins moaning obscenities into the microphone.

The Experience performs at Brown University in Providence, Rhode Island.

The Experience and Soft Machine play two sold out at Atwood Hall on the campus of Clark University in Worcester, Massachusetts. Among the songs performed on this night include: “Are You Experienced?,” “Fire,” “Hey Joe,” “Star Spangled Banner,” “Foxey Lady,” “Purple Haze,” and “Wild Thing.” Jack Tubert interviews Hendrix for the Worcester Daily Telegraph for a story published the next day. The band is also interviewed by Tony Palmer for a November 3 BBC broadcast, “All My Loving.”

The Experience, Soft Machine, The Hanseatic League, and Terry and The Telstars perform at Lewiston Armory in Lewiston, Maine. 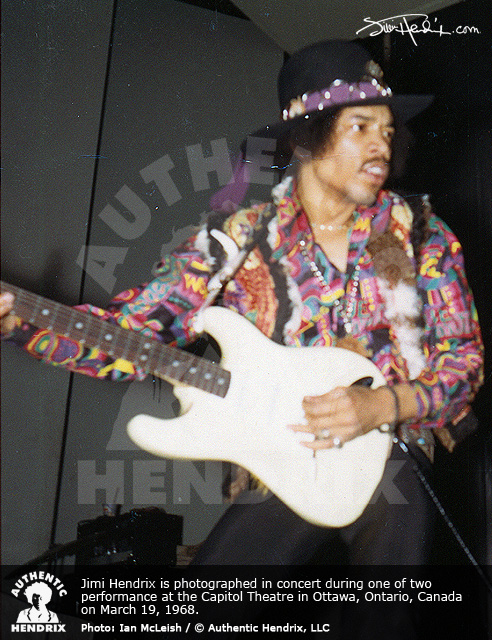 The Experience, Soft Machine, Jesse First Carnival, and Mark Boyle’s Sense Laboratory play the Community War Memorial in Rochester, New York. The performance includes: “Sgt. Pepper’s Lonely Hearts Club Band,” “Spanish Castle Magic,” “Hey Joe,” “Foxey Lady,” “The Wind Cries Mary,” “Red House,” “I Don’t Live Today,” “Purple Haze,” and “Wild Thing.” Jimi writes in his diary, “Today we play Rochester, NY. Really a strange town … oh well … two girls came up to my room by the names of Heidi and Barbra [sic]. Real groovy people. We played one show tonight. Very bad P.A. Bad hall, patient people, but I kind of lost my temper with everything in general. Recorded show with tape recorder. After show we go to girls house with party material. Someone outside got beat up the (illegible). Stayed there over night in the (illegible) room. OK.”

The Experience appear at The Bushnell Memorial Hall, accompanied by The Bowl and Soft Machine. The March 23, 1968 edition of The Hartford Courant indicates that “Sgt. Pepper’s Lonely Hearts Club Band,” “Fire,” “I Don’t Live Today,” and “Little Wing” are performed on this evening. Jimi makes another journal entry, “Today we are in Hartford ((illegible) I had a beautiful diary I kept while we were in Sweden – and of course I lost it. Hmmm… I wonder what Catherina is doing now. I must call her soon before she gets to Switzerland. She’s the only thing I have to hold on to that’s real. Better call her soon. Beautiful room I have. Bought more film, tape, ect… Just came back from gig. Terrible – the people thought we were great. Stage manager dropped the power right into the middle of our act. So I am depressed. Gonna get completed smashed… Let’s see … Where’s that bottle – hmmmm …”

The Experience play the IMA Auditorium in Flint, Michigan. They are joined on the bill by Soft Machine, The Rationals, and Fruit of the Loom.

Hendrix jams with a band named Good Earth at Otto’s Grotto in Cleveland, Ohio. He is interviewed by Jane Scott of The Plain Dealer. The interview is published on March 29.

The Experience play two shows at Xavier University in Cincinnati, Ohio. They are joined on the bill by Soft Machine. Hendrix and Redding are interviewed by The Cincinnati Inquirer. The story is published April 7. The Jimi Hendrix Experience are photographed during their performance at the Xavier University Fieldhouse in Cincinnati, Ohio on March 28, 1968. Photo: © Authentic Hendrix, LLC 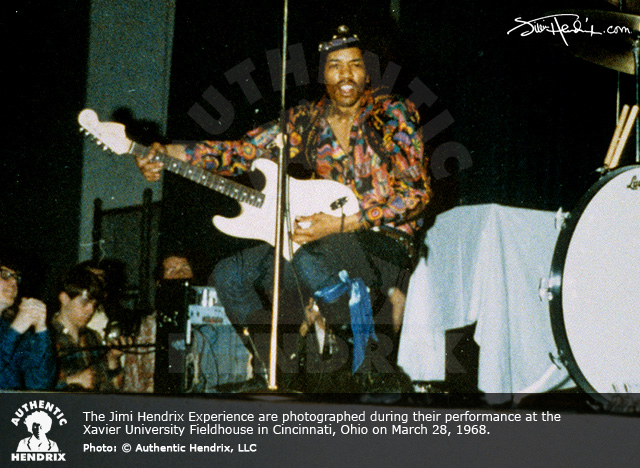 The Experience, Soft Machine, and Woody’s Truck Stop play the Arena in Philadelphia.