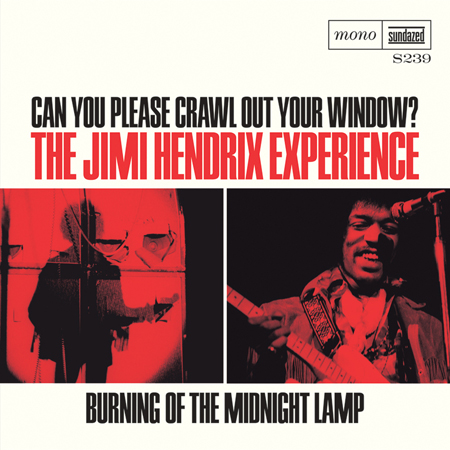 The ongoing series launches in April with an initial release that combines a pair of historically significant recordings from two different Hendrix 1967 BBC sessions. One is a raucous reading of Bob Dylan’s “Can You Please Crawl Out Your Window?”. Hendrix recorded his version on October 17 for BBC Radio’s Rhythm and Blues show. Dylan’s original version, one of history’s most notable and enduring musical enigmas, wasn’t released on a legitimate album for more than 10 years after its first issue. This Jimi Hendrix Experience version was a highlight of the BBC Sessions double album issued by Experience Hendrix/Sony Legacy in October 2010.

“Can You Please Crawl Out Your Window?” is paired with a fascinating, newly discovered take of the Hendrix original “Burning Of The Midnight Lamp,” as performed on August 24,1967 on BBC Television’s Top of the Pops, just a week after the song’s original studio version had been released as a single in Britain on Track Records. In keeping with strict Musician Union regulations, Jimi was to sing live atop the song’s instrumental backing track. The Top Of The Pops presenter announced the Experience, but then ‘The House That Jack Built’ by the Alan Price Set began to play. A few seconds in, Jimi, ever polite, offered an apology, “I’m sorry man but I don’t know the words…” As panic no doubt ensued within the studio’s control room, the program’s flustered presenter apologized and implored Jimi to try it once again.
Both sides feature the classic original Jimi Hendrix Experience lineup of Hendrix on guitar and vocals, Noel Redding on bass and Mitch Mitchell on drums, and capture the band just as it was beginning to emerge as a major force on both sides of the Atlantic.

As with every release in the series, it will feature a color picture sleeve incorporating rare vintage Hendrix photos that capture the legendary artist’s distinctive persona and pioneering spirit.
Janie Hendrix, President and CEO of Experience Hendrix L.L.C. commented: “When the Jimi Hendrix Experience first burst into the world’s collective consciousness, it was through vinyl 45 rpm singles. Our vinyl single release program with Sundazed honors that brilliant history and, even expands on it in a very real way. It is traditional yet innovative, as Jimi certainly was.”

Bob Irwin, President and CEO of Sundazed Music, Inc. commented: “We are thrilled and highly honored to be partnering with Experience Hendrix on this wonderful series. I’m positively elated that my most favorite musician of all time will now be a part of Sundazed.”

In a recording career that spanned only three and a half years prior to his tragic death in 1970 at the age of 27, Jimi Hendrix revolutionized the role of the electric guitar, and radically altered the face of contemporary music. He became rock’s first guitar superstar, with an effortless charisma that matched his visionary talent and intense performing style. His overwhelming influence continues to live on in virtually every electric guitarist who has followed him, yet none have ever equaled Hendrix’s talent and imagination.

ABOUT EXPERIENCE HENDRIX L.L.C. Founded by James ‘Al’ Hendrix, Jimi’s father, in 1995, Experience Hendrix, has been managed since its inception by family members personally chosen by Al during his tenure as Chairman. It is the official family company charged with managing the music, name, image and likeness of Jimi Hendrix. As a part of its daily operations, under President and CEO Janie Hendrix, Experience Hendrix and Authentic Hendrix oversee Jimi’s timeless legacy on a worldwide basis. In connection with its mission, it produces the continuing Experience Hendrix tour of all-star musicians.