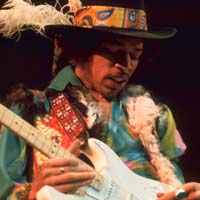 Fans in Sweden, Norway, Finland, UK, France and Spain are the first to experience the brand new music video for “Bleeding Heart.” The previously unreleased studio recording has been given the music video treatment by Producer Julien Temple, who depicts Jimi Hendrix playing at Glastonbury; the performance he never managed to give before he died. The video kicks off Experience Hendrix and Sony Music’s global promotional campaign for the upcoming Jimi Hendrix album Valleys Of Neptune.