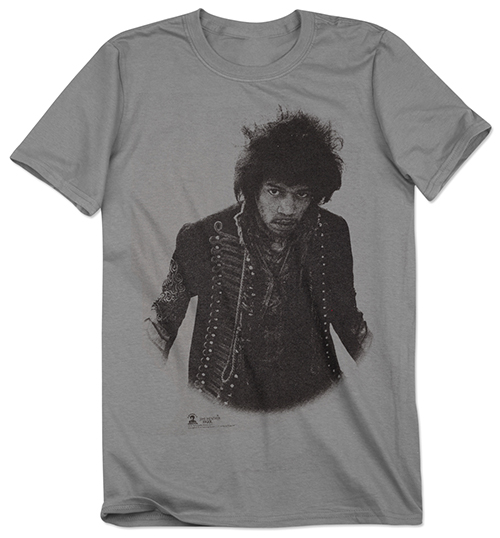 Seattle, WA – 99.9 KISW, The Rock of Seattle, is proud to continue its partnership with the Jimi Hendrix Park Foundation again to help raise fund the development of the new Jimi Hendrix Park in Seattle’s Central District. The KISW/Jimi Hendrix shirt will be sold exclusively through the Rock Shop at KISW.com.

The park will boast many unique features, including the curved shapes of a guitar, an extended shadow wave wall featuring Jimi Hendrix’s image, and a central canopy. The Jimi Hendrix Park Foundation has already raised an excess of $1.4 million of the estimated $1.8 million dollar budget needed to complete the park’s design and construction phases. Construction progress recently passed the 80% mark as the park’s anticipated completion draws closer (the projected date being later in 2016). KISW hopes that through the sale of the shirts, where all net proceeds will go towards this fundraising, the foundation will get even closer to meeting this goal. 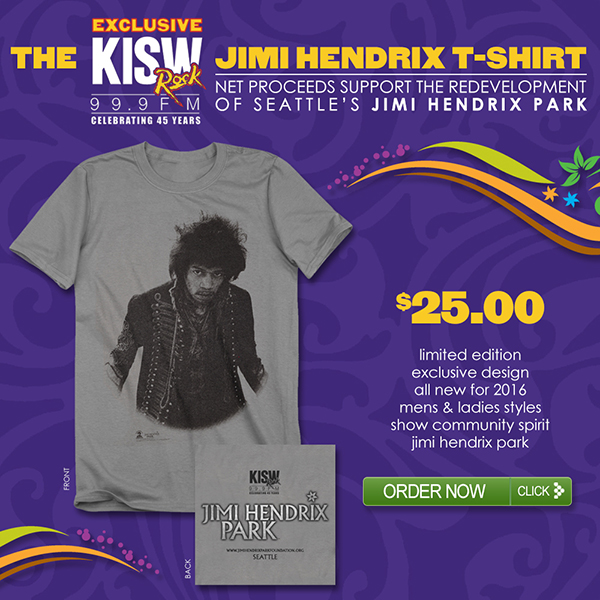 Jimi Hendrix’s music has been crucial to the fabric of KISW since its inception 45 years ago. “Purple Haze” was the first song The Rock played after switching from its previous classical format. KISW believes that Jimi Hendrix’s influence and memory should live on in and benefit the community that helped shape Jimi’s music, and by extension, their radio station. Dave Richards, KISW VP of Programming, said: “We’re humbled and proud to continue our partnership with Janie Hendrix and the Jimi Hendrix Park Foundation and their commitment to the legacy of Jimi and the city of Seattle.”

The partnership between the Jimi Hendrix Park Foundation and KISW began in 2012, when Jimi Hendrix would have turned seventy. For more information on the project, and to purchase the new KISW/Jimi Hendrix shirt, visit KISW. com.

Entercom Communications Corp. (NYSE: ETM), is the fourth-largest radio broadcasting company in the United States, with a portfolio of 125 highly-rated radio stations in 27 top markets across the country. Known for developing unique and highly successful locally programmed stations, Entercom’s brands reach and engage close to 40 million people each week, delivering a curated mix of outstanding local personalities and a broad range of compelling music, news, talk and sports content.

Founded in 1968, Philadelphia-based Entercom also operates hundreds of events each year attracting millions of attendees, and provides customers with a broad range of digital marketing solutions through its SmartReach Digital products.

The Jimi Hendrix Park Foundation was formed to help create a community space inspired by the electrifying music and story of Jimi Hendrix. To create a gathering place for individuals of diverse backgrounds and ages to celebrate cultural heritage, experience community pride, and enjoy innovative educational programming.

Inspired by the music and legacy of Jimi Hendrix, the park, named in his honor, will beautify Seattle, motivate youth and others to achieve in music and art, and strengthen the cultural pulse of the Emerald City, Jimi Hendrix’s hometown.

Jimi Hendrix Park is located in the heart of Seattle’s vibrant Central District (2400 South Massachusetts Street), a thriving multi-cultural community rich in heritage. Nestled adjacent to the Northwest African American Museum and grounds of former Colman School, Jimi Hendrix Park will be a primary focal point for multicultural events, gatherings, and activities for the community. For more information or to support the cause, visit www.jimihendrixparkfoundation.org or follow us on Facebook or Twitter (@JimiHendrixPark).

Founded by Jimi Hendrix’s father, James “Al” Hendrix, and owned and operated by his personally chosen members of the family; Experience Hendrix, L.L.C. and its wholly owned subsidiary Authentic Hendrix, LLC, manage the globally recognized Jimi Hendrix copyrights and trademarks. Their administration of the exclusive right to Jimi’s music and lyrics, plus an extensive photo archive helps create a legacy of products that mirror Jimi’s own creative vision. To learn more, visit www.jimihendrix.com or follow us on Facebook, Twitter (@JimiHendrix) or Instagram.