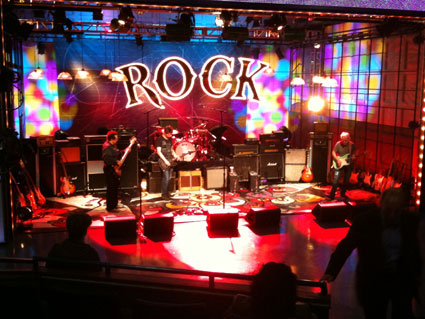 An all-star cast of musical giants, all fresh from the latest edition of the Experience Hendrix tour, will be performing Jimi Hendrix’s classic “Fire” on the Tonight Show this coming Monday, December 6th.  The grouping of greats, reflective of the influence Jimi Hendrix has had through successive generations, includes young guitar slinger Jonny Lang, Aerosmith’s own Brad Whitford, Billy Cox of the Jimi Hendrix Experience and Jimi Hendrix Band of Gypsys and Chris Layton of Stevie Ray Vaughan’s Double Trouble.  These same players, along with such noteworthy musicians as Kenny Wayne Shepherd, Steve Vai, Los Lobos’ Cesar Rosas and David Hidalgo, Susan Tedeschi, Ernie Isley, Robert Randolph, just completed performing the music of Jimi Hendrix to sold-out audiences throughout the US and Canada, on the latest edition of the ongoing Experience Hendrix Tour.

Johnny Lang who hadn’t even picked up a guitar until more than 20 years after Jimi Hendrix’s untimely passing, commented on the Hendrix legacy, “I think he continues to be the chief innovator of the electric guitar. I always knew he was kind of an icon, but when I started playing guitar and tried to emulate him, I found out why he was really an icon,” Lang said. “It’s extremely difficult to do. Every time I try to learn a song, I’m just in awe. His sensibility in every area comes so naturally to him, where it doesn’t for most musicians.”

Whitford, who has has been an integral part of Aerosmith for the past 39 years, likewise has a strong affinity for the musical legacy of Jimi Hendrix as well as a very personal connection to it. “I got to see Hendrix play in ’68 in Boston Garden and it was like, ‘Wow.’ I bought a Fender guitar the very next day,” he recalls. “Since the first time I heard him, and right up until today, [Hendrix] has been an important influence on me — on all of us,”

Billy Cox, the legendary bassist whose relationship with Jim Hendrix and his music dates back to the early 1960s when the two met while serving in the U.S. Army’s 101st Airborne Division. The two bonded over their love of music and would later work together backing R&B acts on the “chitlin’ circuit.”  They reunited when Cox was recruited to be part of the Jimi Hendrix Band of Gypsys as well as the ultimate iteration of the Jimi Hendrix Experience, performing at such landmark festivals as Woodstock and the Isle of Wight. “It’s always a great thrill and honor for me to play Jimi’s music for audiences now just as it was in the 1960s.  The Experience Hendrix tours have shown how timeless this music really is and is just wonderful that we’ve continued to get an infusion of new, very enthusiastic artists to participate and are able to offer the most wide-ranging Jimi Hendrix-related repertoire possible.”  Cox actually backed Hendrix up on the Tonight show on July 10, 1969 with Flip Wilson guest hosting for Johnny Carson; it was his first performance with Jimi after runiting with him. Tonight Show band drummer Ed Shaughnesy completed the trio on that occassion.

Chris Layton is the Texas drummer who rose to prominence backing the late Stevie Ray Vaughan as part of Double Trouble.  Vaughan, of course, was hugely influenced by Jimi Hendrix and Layton has been part of the Experience Hendrix touring group for the past six years and has played with Doyle Bramhall II, Buddy Guy and Kenny Wayne Shepherd over the years.  Last year he inducted his great friend and Experience Hendris Tour collaborator Billy Cox into the Musician’s Hall of Fame in Nashville.