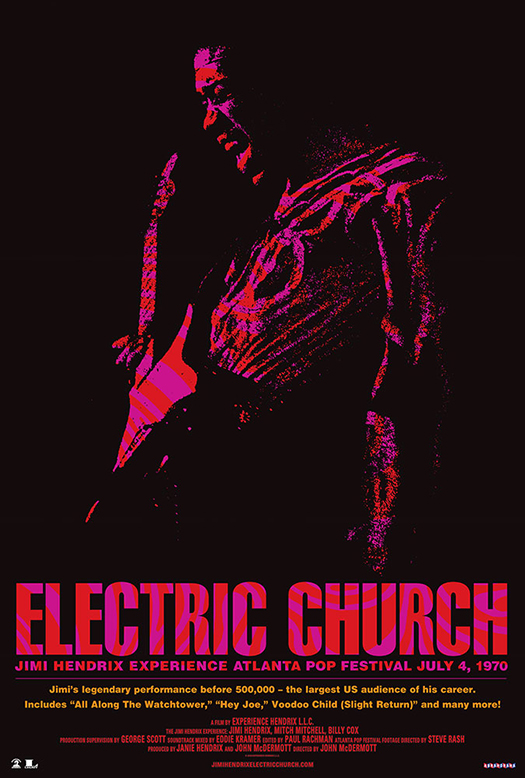 PLAYING IN SELECT THEATERS AROUND THE WORLD
STARTING JANUARY 31ST

Captured in front of his largest U.S. audience, the documentary features Hendrix at the historic July 4, 1970 performance at the ‘Southern Woodstock’

Abramorama announced today a partnership with Experience Hendrix L.L.C. and Sony Legacy Recordings to release Jimi Hendrix: Electric Church in select theaters around the world. The film opens at the ArcLight Hollywood theater on January 31st with a special Q&A with director John McDermott, legendary record producer and engineer Eddie Kramer (best known for not only collaborating with Hendrix but also with The Beatles, David Bowie, Eric Clapton, The Rolling Stones and others) and Jimi’s sister and Experience Hendrix C.E.O. Janie Hendrix. The post-screening panel will be moderated by 89.3-KPCC’s John Rabe. The much-lauded documentary, which originally aired on Showtime, tells the story of the Jimi Hendrix Experience’s involvement as the headliner of the Second Atlanta International Pop Festival, then hailed as the ‘Southern Woodstock.’

Richard Abramowitz, CEO of Abrmorama stated, “We’re honored to add another Jimi Hendrix movie to the exalted list of music films we’ve released. Jimi certainly belongs in the pantheon with The Beatles, Bob Dylan, Neil Young, Pearl Jam, Tony Bennett and the many others we’ve been privileged to handle around the world.”

Janie Hendrix commented on the Electric Church partnership with Abramorama, “It’s thrilling on so many levels. Seeing Jimi re-introduced around the world through this platform is something of a rebirth.” She added, “The moments captured in the film are timeless. Jimi’s music and his showmanship are born again for new generations in his Electric Church. It’s very exciting.”

Unquestionably one of the most exciting rock musicians of his generation, Jimi Hendrix captivated the world with his highly stylized approach to blues guitar. Electric Church features an interview with Paul McCartney who freely admits to worshipping Hendrix, commenting, “We all played guitar. We all knew a bit. But he seemed to know more than us.” The film features interviews with Hendrix’s Experience band mates Billy Cox and the late Mitch Mitchell as well as Steve Winwood, Rich Robinson, Kirk Hammett, Derek Trucks, Susan Tedeschi, festival organizer Alex Cooley and many others.