Jimi Hendrix: Electric Church Out On DVD And Blu-ray November 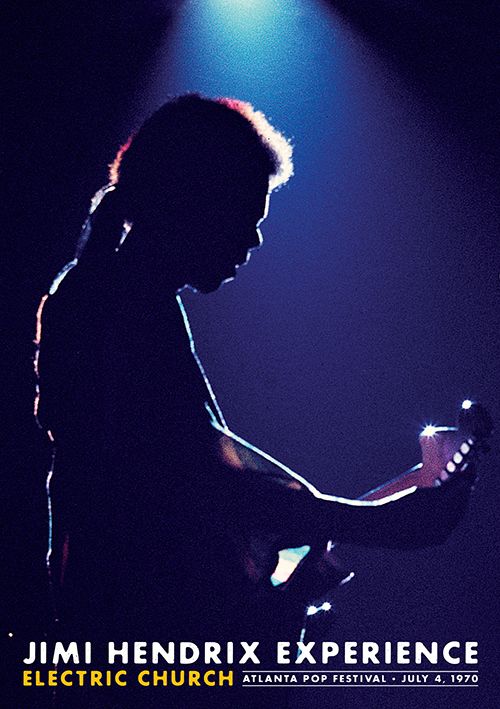 Documentary About Historic July 4, 1970 Performance In Front Of His Largest Ever U.S. Audience Features Footage Not Included in Showtime Version

“The footage will take your breath away.. the definitive Hendrix cover of ‘Star-Spangled Banner.'” – Jeff Slate, Esquire

“In addition to showing the guitar god at the height of his power, ‘Electric Church’ also offers a fitting coda to Hendrix’s amazing yet all-too-brief career.” – Carlton Fletcher, Albany Herald

“Jimi Hendrix’s talk about using music as an agent to bond souls in peace and love has yet to become a worldwide reality. But when you hear Hendrix himself in this documentary . . . it’s hard not to wish and dream.” – David Hinckley, New York Daily News

Due to unforeseen manufacturing delays, JIMI HENDRIX: ELECTRIC CHURCH will be released on DVD and Blu-ray on Friday, November 6, 2015.

On November 6, Experience Hendrix L.L.C. and Legacy Recordings will release Jimi Hendrix: Electric Church on DVD and Blu-ray. The much-lauded documentary, an abridged version of which aired on Showtime, tells the story of the Jimi Hendrix Experience’s involvement as the headliner of the Second Atlanta International Pop Festival, then hailed as the “Southern Woodstock.” The audio soundtrack includes stereo and 5.1 surround sound mixes by Hendrix’s recording engineer Eddie Kramer, taken directly from the original master tapes. The DVD and Blu-ray versions include two songs not seen in the televised version: “Red House” and “Freedom,” and a special added bonus music video for “Room Full Of Mirrors” that combines the existing footage with never-before-seen photographs of the performance.

The film details the efforts by Atlanta promoter Alex Cooley to create the definitive music festival. Cooley secured such talent as Bob Seger, BB King and the Allman Brothers, but Hendrix was the critical component he needed to elevate the three day festival to a major cultural event. Electric Church features interviews with Hendrix’s Experience band mates Billy Cox and the late Mitch Mitchell as well as Paul McCartney, Steve Winwood, Rich Robinson, Kirk Hammett, Derek Trucks, Susan Tedeschi, festival organizer Alex Cooley and many others. The film contains breathtaking, color 16mm footage of Jimi Hendrix’s Independence Day appearance, a mere ten weeks before his untimely passing. Standout performances include such Hendrix classics as “Hey Joe,” “Voodoo Child (Slight Return),” “Purple Haze,” as well as confident, compelling versions of songs such as “Straight Ahead,” and the aforementioned “Freedom” and “Room Full Of Mirrors” that had not yet been issued by Jimi on an Experience album, but were intended to be part of the album he was working on that summer. “The Star Spangled Banner,” played against a backdrop of exploding fireworks, is another highlight, which Cooley recalls as having “knocked people’s socks off.”

The DVD/Blu-ray release of Jimi Hendrix: Electric Church comes on the heels of Experience Hendrix L.L.C. and Legacy Recordings’ August release of the Jimi Hendrix Experience’s Freedom: Atlanta Pop Festival double CD and double LP, an audio companion to the documentary. It is Jimi Hendrix’s 46th entry onto the Billboard charts. In his Freedom: Atlanta Pop Festival liner notes, Bill Mankin, who worked on the construction and stage crews for the festival, describes Hendrix’s impact on the festival. He writes, “At the center of the vortex was the master magician on guitar: the personification of a life lived fully and wildly, with no boundaries, no limitations, and aiming for the stars at light speed.”

*Not in televised version