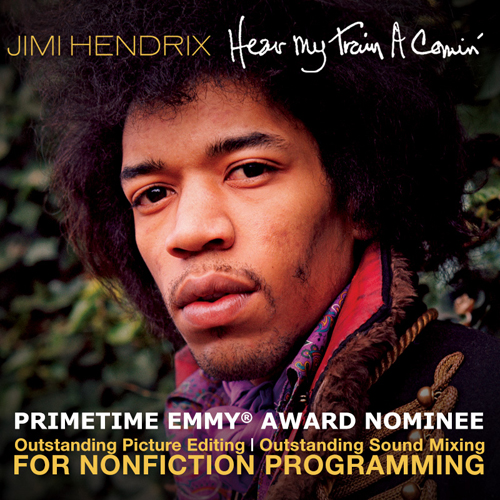 Directed by Bob Smeaton, Hear My Train A Comin’ provides an in-depth look into the upbringing and expeditious ascent into stardom of one of the most beloved musical personalities of the 20th century. Released by Legacy and Experience Hendrix, LLC, the DVD and Blu-ray versions contain a multitude of bonus features that never aired.

DVD and Blu-ray editions of Jimi Hendrix: Hear My Train A Comin’, released by Experience Hendrix LLC through Sony’s Legacy Recordings include special content not seen in the American Masters broadcast version as follows:

Never before released color film footage of the group’s legendary May 18, 1968 festival performance, including “Foxey Lady,” “Tax Free,” and “Fire” in addition to interviews with festival promoter Michael Lang and engineer Eddie Kramer.

Never before released color film footage of the group’s July 17, 1970 festival performance, including “Message To Love,” “Lover Man,” “All Along The Watchtower,” “Purple Haze,” and “Voodoo Child (Slight Return).”

Newly discovered film footage of Jimi Hendrix’s final performance on September 6, 1970 at the Isle Of Fehmarn, Germany. Includes “Killing Floor,” “Spanish Castle Magic,” “All Along The Watchtower” and “Foxey Lady.”

TOP OF THE POPS: