Janie Hendrix: what Jimi Hendrix means to me 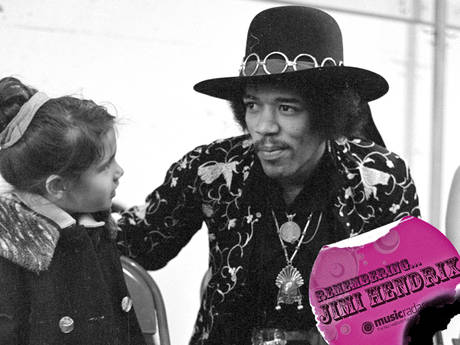 “Jimi was an icon, of course, but to me he was always just Jimi, my older brother. He was a special kind of brother, though. Even before I realized how incredibly talented he was and that he had become a star, I knew there was always something a little magical about him. I think it was just in the way he acted towards me and how good I felt when I was around him.

“Jimi belonged to the world, and he loved traveling and performing, but he couldn’t wait to come home and spend time with us. And we couldn’t wait to have him back. I remember one time I was at the airport with my father, and we were standing at the gate waiting for Jimi, who was just coming back from Europe. Everybody got off the plane and walked by us. One by one, there everybody went. We started to think that maybe he missed his plane or we had the wrong flight information or something.

“Well, wouldn’t you know it? Jimi was the last one off the plane. We were so thrilled to see him. He had on his cool rock ‘n’ roll military jacket and his hat – he looked incredible! But he had gotten so skinny from traveling and all the late nights. He was excited to get home and relax and eat home-cooked food again.

“Whenever he came home, he didn’t have to be ‘Jimi Hendrix.’ He could just be himself, and he liked that. We sat around and talked. We played Monopoly, too, just like normal brothers and sisters. There was always a lot of laughing. It was like a big celebration when Jimi would come home.

“One thing that was interesting was that, around that time, my father was teaching himself how to play the tenor saxophone. It was so sweet, watching the two of them talk about music. My father had tried to learn the sax before. He actually bought a saxophone at the same he bought Jimi his first guitar, and the plan was that they would learn the instruments together.

“Whenever he came home, he didn’t have to be ‘Jimi Hendrix.’ He could just be himself, and he liked that.”

“But my dad was so busy with work and trying to pay the bills, and it became clear that Jimi was making more progress on the guitar. So my dad said, ‘I’m going to take the saxophone back and pay off the guitar – I think you’re going to go places with it, Jimi.’ Obviously, he was right, but it was nice when he got the saxophone again and told Jimi he was finally going to learn to play it.

“Growing up, it was very odd having the private Jimi, my brother, and then seeing the public Jimi in newspapers or on the Dick Cavett Show. On TV, he was one person, kind of shy and brooding and uncomfortable. But when he was home, he was totally different, running around the house, tickling me and goofing around, trying to make me laugh. He just loved to have fun.

“My dad was always a strict disciplinarian. He had been hard on Jimi, and later on he was the same way with me. He just didn’t tolerate nonsense. I remember one time when Jimi was home he kind of gave me these sad eyes, like, ‘I am so sorry. I know Dad’s being kind of tough on you.’ He even offered to take me to Hawaii for a month, but my Dad nixed it. Jimi was like, ‘She’ll be okay. I got plenty of people to look after her.’ But Dad wouldn’t hear of it. Jimi just looked at me like, ‘Hey, I’m trying.’

“It wasn’t always fun being the sister of a big star. I got teased a lot. I went to a public school, and some kids would pick on me. They didn’t believe that Jimi Hendrix was my brother. ‘Oh yeah? Then why aren’t you in a big fancy private school?’ – I got stuff like that. It isn’t like I went around flaunting that Jimi was my brother; it would just come up, or somebody else would mention it. So that could be hard. Getting picked on for any reason isn’t nice.

“For the most part, though, my life was pretty normal. My parents tried to keep things simple and make sure I wasn’t affected by what was going. All of that would go out the window when Jimi would come to town and we’d go riding around in The Spaceship – that’s what we called his limo. How many little girls get to ride around in a limo? Not many. It was like something out of a fairy tale.

“When I was in college, the impact of what Jimi’s music really hit me. I know that sounds strange, but you know, I was older then and had lived and experienced some things. His music, his lyrics, his message – it all really started to resonate with me. Because Jimi was always trying to get it across that there should be equal rights for everybody, the races, the sexes. I know that gets lost sometimes because he was such an incredible performer, but he was a very deep soul who was very wise. Spirituality was very important to him.

“A girl came up to me and said, ‘I’m really sorry.’ I asked her why, and she just gave me this look and said, ‘Well, I heard that your brother died today.'”

“I was in fourth grade when he died, and I can recall that day very clearly. I was in class, and a kid stood up for Show And Tell and just blurted out, ‘Jimi Hendrix died today.’ Everybody kind of gasped, and the teacher looked at me, and I just said, ‘It’s not true.’ Because we had already gotten a crank call at home a month before with somebody trying to wind us up that Jimi was dead, which of course turned out to be false. So I thought this was the same kind of thing. Also, to me, Jimi was a superhero: death was not going to capture him.

“Halfway through the day, a girl came up to me and said, ‘I’m really sorry.’ I asked her why, and she just gave me this look and said, ‘Well, I heard that your brother died today.’ At that point, I thought to myself, OK, two people are saying this…I wonder if something really did happen. We didn’t have cell phones and things like that, so I was in the dark the rest of the afternoon.

“I walked into the house and I thought, These idiots shouldn’t believe it. What are they doing here? It’s a rumor. But then my dad grabbed me and scooped me up and ran me into his room. He was sobbing, and he looked at me and said, ‘Jimi died today, and our lives will never be the same.’ I didn’t want to believe it, but seeing my dad crying, I knew it was true.

“I went to my room and looked at all of my posters of Jimi, and I just said, ‘How could you do this, Jimi? How could you leave us?’ I had one of those blacklight posters of him – his face actually kind of looked like death, it was weird – and I told my father that I wanted to take that one down. I just couldn’t bear to look at it.

“I have so many fond memories of Jimi. He was such jokester, and he loved to make me laugh. I was really into Batman as a kid, and Jimi knew this, so he would chase me around the house while wearing one of his capes and humming the Batman theme. That was a lot of fun.

“Of the times I got to see him play, one concert really stands out, and again it shows you how sweet he could be. It was during his last performance in Seattle at the Sick’s Stadium. I was seated on one of the amps, and during Purple Haze he turned to me and pointed right at me and sang the line, ‘That girl put a spell on me!’ It was so great, so innocent. Everybody started laughing. My friends couldn’t believe it: ‘He’s pointing at you! He’s pointing at you!’ That’s just the kind of brother he was. He was very loving, and he never forgot his family, no matter what.”

Janie Hendrix is the President and CEO of Experience Hendrix LLC.