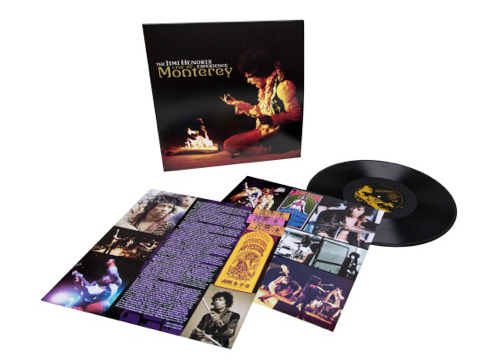 Live At Monterey will be available only at participating stores, specially priced at $19.98. The recording was mastered using an all-analogue technique by renowned audio engineer Bernie Grundman and pressed by Quality Record Pressings (QRP), the plant responsible for last year’s People, Hell & Angels, among many other titles in the Hendrix canon. Each copy is individually numbered, and includes an essay written in 2007 by Jimi Hendrix Experience drummer Mitch Mitchell. He passed away the next year after completing the 2008 edition of the Experience Hendrix all-star tribute tour.

Live At Monterey captures The Jimi Hendrix Experience’s mythic U.S. debut performance on June 18, 1967 at the Monterey Pop Festival. A captivated California audience witnessed the original band line up of Hendrix, Mitchell and bassist Noel Redding blaze through soon-to-be-classic originals such as “Foxey Lady,” “The Wind Cries Mary,” and “Purple Haze,” as well as transformative versions of Bob Dylan’s “Like A Rolling Stone,” and The Troggs’ “Wild Thing” before Hendrix set his guitar ablaze. This show is credited as having launched The Jimi Hendrix Experience into superstardom; they would go on to become the highest grossing touring act in the U.S. soon thereafter.

Also set for release from Experience Hendrix and Legacy on May 20th is an all-analog stereo edition of Are You Experienced, the band’s 1967 debut full-length studio album. The album, also priced at $19.98, contains such eternal classics as “Hey Joe,” “Purple Haze,” “The Wind Cries Mary,” “Fire,” and the title song, whose backward drum tracks and otherworldly guitar work still sound innovative almost a half-century later.

This year marks the seventh annual Record Store Day, the purpose of which is to celebrate the culture of the independently owned record stores. Experience Hendrix has long been an RSD supporter and has a lengthy history of Record Store Day-specific releases.

Side One:
Killing Floor
Foxey Lady
Like A Rolling Stone
Rock Me Baby
Hey Joe

Side Two:
Can You See Me
The Wind Cries Mary
Purple Haze
Wild Thing

Side One:
Purple Haze
Manic Depression
Hey Joe
Love Or Confusion
May This Be Love
I Don’t Live Today

Side Two:
The Wind Cries Mary
Fire
3rd Stone From The Sun
Foxey Lady
Are You Experienced?