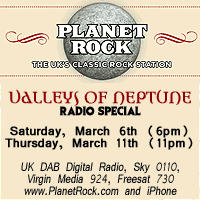 Planet Rock, the UK’s classic rock station is celebrating Jimi Hendrix by airing an hour long special on
this phenomenal guitarist. Planet Rock talks to a whole host of guitarists who tell the station why
Jimi Hendrix is “The guitarist’s guitarist!”

The likes of Black Sabbath’s Tony Iommi, Journey’s Neal Schon and Queen’s Brian May (to name but a few)
each give their point of view and experiences of Jimi Hendrix’s music and tell us why he is such an
extraordinary player. The show will also feature some of his all time classic songs as well as new ones
from his brand new album Valleys of Neptune, released Monday 8th March (UK).

It is 40 years since Jimi died and his legacy still continues.