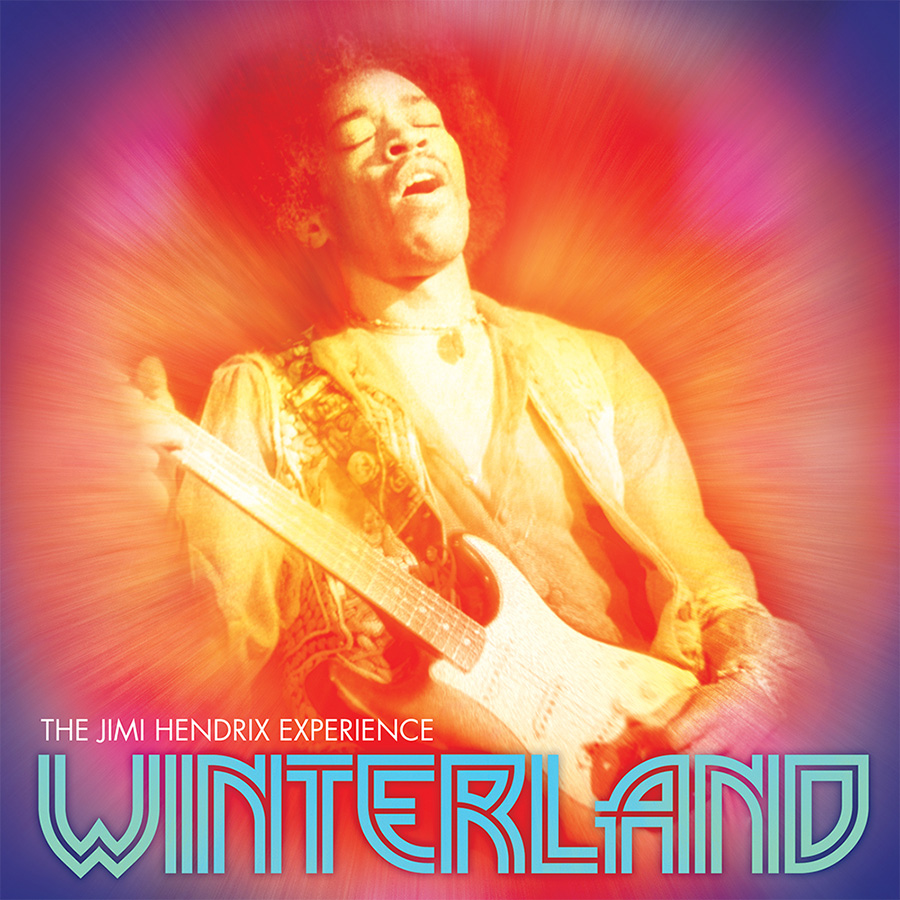 The fourth round of titles from the artist Rolling Stone magazine called “the greatest guitarist of all time” focuses on Hendrix the concert performer with four outstanding releases underscoring the artist’s electrifying on-stage prowess: Winterland (a 4 Disc Deluxe Box Set), Hendrix In The West (Expanded), Blue Wild Angel: Jimi Hendrix Live At The Isle Of Wight on DVD, and Jimi Hendrix: The Dick Cavett Show (every Hendrix appearance on the celebrated talk show on DVD).

Winterland is drawn from six stellar shows recorded over three days (October 10, 11 and 12, 1968) at San Francisco’s historic Winterland Ballroom.  These special performances celebrated the two year anniversary of the Jimi Hendrix Experience and came just as the groundbreaking album Electric Ladyland was released.

Winterland presents some of Hendrix’s most spectacular guitar work and the four CD set (also available as eight 12″ vinyl LPs) is filled with rare live versions of classic songs such as “Manic Depression,” “Are You Experienced?,” “Tax Free,” and “Little Wing” that are not part of any other Sony Legacy release.  Fans will also enjoy Hendrix’s dramatic interpretations of Cream’s “Sunshine Of Your Love” and Howlin’ Wolf’s “Killing Floor” [with the Experience joined by Jefferson Airplane bassist Jack Casady] as well his rendition of Bob Dylan’s “Like A Rolling Stone,” which has been selected as the lead track for this special release.

This special deluxe box set features never before released music from each of the six unforgettable Winterland performances.  The new standard and deluxe editions of Winterland are markedly different from a single disc compilation, long out of print, that was briefly issued by Rykodisc in 1987 and 1988.

The deluxe edition also presents a rare interview with Hendrix recorded backstage at the Boston Garden a few weeks after the Winterland performances.  This previously unreleased bonus provides fans with a unique window into Hendrix’s views about his background, his approach to the guitar and songwriting and future direction of his music.

The featured track, “Like A Rolling Stone,” will precede the album’s release as a CD and 7″ vinyl single coming out Tuesday, August 23 in the states (international release date: August 22). The single will also feature a previously unreleased live version of “Purple Haze” from the Winterland concerts that will not be featured on the box set.

Amazon will offer an exclusive bonus CD to be bundled with all orders of the four CD and 8 LP Winterland box sets sold through Amazon during 2011 consisting of recordings from Jimi’s February 4, 1968 Winterland performance: “Killing Floor,” “Red House,” “Dear Mr. Fantasy (Part One)” and “Dear Mr. Fantasy (Part Two).”  These tracks have been previously available only as part of the rare Dagger Records official bootleg Paris ’67/San Francisco ’68  and have never been available for retail sale.

Consisting of live material recorded at venues ranging from the Berkeley Community Theatre and the San Diego Sports Arena to the Isle of Wight Festival, Hendrix In The West captures the guitarist exploring new directions in sound during 1969-70.  Robert Christgau, the Dean of American Rock Critics, called Hendrix’s versions of “Red House” and, “Johnny B. Goode” on this album “definitive.”  Out of print in the US since 1974 and for more than two decades internationally, Hendrix In TheWest, has remained one of the most requested albums by fans to return to the commercial marketplace.

Hendrix In The West will be reissued as an expanded single disc featuring five additional, previously unavailable performances. The album’s iconic cover features a classic Jim Marshall photograph of the guitarist and the twenty-four page book is filled with rare and previously unseen images captured by Marshall’s distinctive lens.  This expanded edition of Hendrix In The West will also be available on 12″ vinyl as a 2 LP set.

Tracklisting Hendrix In The West

Experience Hendrix has also expanded this definitive presentation of Jimi’s historic performance before 600,000 at the Isle of Wight Festival in August 1970.

This new definitive DVD edition also features newly discovered footage of Hendrix’s Isle Of Wight performance of “Hey Joe,” the single that launched his meteoric career in England in 1966.

The complete collection of Jimi Hendrix’s celebrated appearances on The Dick Cavett Show is now available on Legacy Recordings.  The Dick Cavett Show marked Jimi’s US network television debut and this special documentary, directed by multiple Grammy Award winner Bob Smeaton [Beatles Anthology, Band Of Gypsys], features complete live performances of “Izabella”, “Machine Gun”, and “Hear My Train A Comin'” as well as new interviews with Cavett, Experience band members Mitch Mitchell and Billy Cox, and others. Jimi’s own insightful interviews with Cavett touched upon a variety of personal and professional issues ranging from his stint as a US Army paratrooper to his celebrated rendition of the “Star Spangled Banner” at the Woodstock Festival. These conversations with Cavett helped reveal the humor, passion, and intelligence of the man behind such rock classics as Are You Experienced and Electric Ladyland.

Massively popular with fans and critics alike, the 2010 Experience Hendrix tour inspired
Larry Rodgers of the Arizona Republic to rave, “It was encouraging to see fans of all ages, from teens to baby boomers who witnessed Hendrix’s career launch firsthand, in the Mesa crowd. The show and that crowd made it clear that Hendrix’s magical music will never die.”

Dan Durchholz, covering the tour for the St. Louis Post Dispatch marveled at how “…the Experience Hendrix tour showed just how pervasive (Hendrix’s) influence continues to be. The three-hour show featured an all-star lineup from a variety of musical traditions, united by a collective debt to the iconic artist’s songs, showmanship and trailblazing technique. Despite its creator’s demise decades ago, Hendrix’s music is still alive and well.”

Experience Hendrix bassist Billy Cox — who first befriended Hendrix in the 101st Airborne Division of U.S. Army, played in both the Jimi Hendrix Experience and Band of Gypsys and performed with Hendrix at such landmark festivals as Woodstock and the Isle of Wight — is delighted to play a part in the current tour saying, “It’s a thrill for me to play Jimi’s music for audiences now as it was in the 1960s.”

Legacy’s first round of Jimi Hendrix releases opened with the release of Valleys of Neptune, a long-awaited album of previously unavailable Jimi Hendrix studio recordings, which debuted on the Billboard 200 best-selling albums chart at #4 while four additional Hendrix catalog titles — Are You Experienced (#44),  Electric Ladyland (#60),  First Rays of the New Rising Sun (#63), and Axis: Bold As Love (#67) — rocketed back into the Billboard 200 four decades after their original release dates.  A testimony to the enduring vitality and importance of the trailblazing artist-guitarist-performer, Jimi Hendrix had five albums in America’s Top 100 in March 2010.

The third wave of Legacy Hendrix reissues, released in April 2011, offered the definitive edition of the career-spanning posthumous album South Saturn Delta; a deluxe DVD edition of Jimi Hendrix: Band of Gypsys (Live at Fillmore East), winner of the 1999 Best Long Form Music Video Grammy; and “Fire” coupled with “Touch You” a limited edition single available on 7″ vinyl and CD (with a third unreleased track “Cat Talking To Me”), struck in celebration of nationwide Record Store Day on Saturday, April 16.