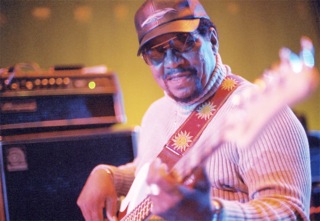 Billy Cox, the bassist who worked with Jimi Hendrix in
concert and in the studio as part of both the Band of Gypsys and the Jimi
Hendrix Experience, will be hitting the road with his own band on a multi-city
tour with stops in New York, Washington DC, Boston and other m arkets
throughout the northeastern US. The performances are billed as Billy
Cox/Band of Gypsys Experience and will feature special guests Dani Robinson and
Byron Bordeaux as part of his band. The tour kicks off on June 19 in
Northampton, MA. In addition to Hendrix classics such as “Machine
Gun” and “Voodoo Child (Slight Return)” Cox will also showcase
his impressive blues roots–drawing upon the trove of performances and
recording sessions he made with such legends as Slim Harpo, Little Milton,
Gatemouth Brown and Freddie King.

Joining Cox will be two exciting guitarists he personally
picked for these special performances. “It was Jimi’s dream to use a second
guitarist. He was getting into a new phase of his music and he felt that
one guitar limited the band and limited the new music that he was creating,”
explains Cox “There were glimpses of what he was trying to do at Woodstock with
Larry Lee as the second guitarist. But that idea was not able to
continue. Now almost 43 years later, I am grateful that I have the
opportunity to continue the dream with two dynamic guitarist, Dani Robinson and
Byron Bordeaux.”

Cox is,
of course, the stellar bassist who first joined forces with Jimi Hendrix when
they chanced to meet while serving in the US Army more than 50 years
ago. After they were discharged, Hendrix and Cox moved to Nashville
and played the southern ‘chitlin circuit’ backing up big names of the era
including Sam Cooke and Jackie Wilson and with their own band, The King
Kasuals. They lost touch with each other after Hendrix was
‘discovered’ by Animals bassist Chas Chandler who brought Jimi Hendrix to
England where the Jimi Hendrix Experience was founded in London In October of
1966.

When
Noel Redding departed the Jimi Hendrix Experience, Hendrix sought and found his
old buddy and thereafter formed Gypsy Sun & Rainbows, the expanded ensemble
that Hendrix featured at the Woodstock festival and then the Band of Gypsys
with drummer Buddy Miles. Following that, Cox and Hendrix remained
together in the re-envisioned version of the Jimi Hendrix Experience that
headlined major pop music festivals as the Isle Of Wightand continued to tour
until Jimi’s untimely death. Cox’s most recent studio album Old School
Blue Blues has been a critical success since its release October of 2011. Billy
Cox is also featured as a musician on the current Jimi Hendrix release People,
Hell & Angels, which debuted at #2 on the Billboard Charts earlier this
year.

“Our show could be described as triangular in context, we
perform not only Hendrix, but some originals and some old school,” says Cox
describing his forthcoming tour dates “We are most especially committed to
giving the audience an evening of good listening and fun. Dani and Byron
embody the spirit of guitar showmanship.”

Dates for the Band of Gypsys Experience: