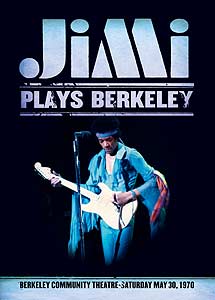 Derived from a pair of concerts at the Berkeley (California) Community Theater on May 30, 1970, Jimi Plays Berkeley the film has always been a curious chapter in the history of Jimi Hendrix. Shot more as a test than a true documentary, it was hurriedly whipped together as an official film shortly after the great singer-songwriterguitarist’s unfortunate death, and actually was put on an European tour with acts managed by the artist’s former manager. The final product has protest footage interspersed among the great performances, and at the time, when everyone was so hungry for anything Jimi, it became one of the most popular music films of its era. Now it can be viewed more as a time capsule wrapped around performances by Hendrix et al, performing a distinctly unique set for the time.
The film features excerpts of performances by Jimi, bassist Billy Cox, and drummer Mitch Mitchell from the two concerts. They perform hot versions of such Hendrix favorites as “Purple Haze,” a remarkable lengthy tour de force takes on “Machine Gun” and “Voodoo Child (Slight Return),” and the artist’s inimitable take on Chuck Berry’s “Johnny B. Goode.”