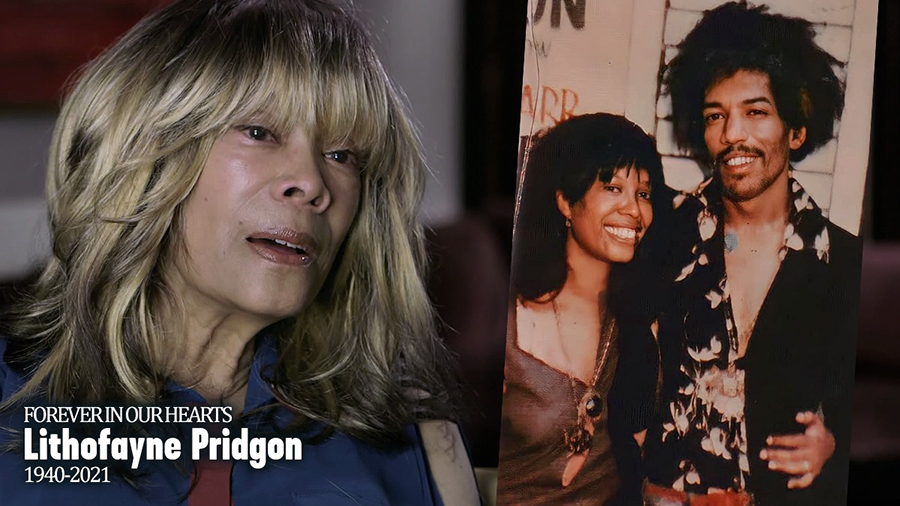 Experience Hendrix and the Hendrix family are deeply saddened at the passing of Lithofayne “Faye” Pridgon at the age of 80.

By 1964, Jimi Hendrix had gravitated to Harlem, the home for black music on the East Coast. It was here that Jimi met Faye, a fixture in the Harlem scene, in a club. A strong, beautiful woman, Pridgon was a local diva, well connected to Harlem’s major players. Although not a musician herself, she dated luminaries such as Otis Redding, Little Willie John, Sam Cooke and later Eddie Hazel. She also performed as a backup singer in Bobby Blue Bland’s Blandolls.

In 1972, signed by the label’s founder Ahmet Ertegun, Faye secured a recording contract with Atlantic Records and recorded an unreleased album at Muscle Shoals studio alongside guitarist Shuggie Otis.

Faye and Jimi enjoyed an immediate connection with the two sharing a love for each other and music. They lived together, wrote songs and spent hours together listening to favorites from her mother’s deep collection of blues 45s and 78s. She would later say that Hendrix would sit, transfixed, playing and singing to the likes of “Anna Lee” by Elmore James, lifting the needle back over passages he loved over and over again. Pridgon was struck by Hendrix’s knowledge and understanding of these artists and their music. Their relationship helped inspire Hendrix’s hit song “Foxey Lady.”

Faye understood Jimi’s struggles to find steady work in Harlem and quickly intervened on his behalf, first securing a few gigs backing Sam Cooke and later, through a friend, she arranged Jimi an audition for The Isley Brothers. He made a positive impression and earned a position in the I.B. Specials, their backing group.

Following Jimi’s passing, Pridgon was interviewed for the 1973 theatrical film A Film About Jimi Hendrix. In 2003, Faye contributed the liner notes for the album Martin Scorsese Presents The Blues: Jimi Hendrix and more recently was featured in Experience Hendrix’s 2013 documentary film, Hear My Train A Comin’.

“Faye was an extraordinary lady,” explains Experience Hendrix Catalog Manager, John McDermott. “We began a friendship more than 30 years ago which continued right up to her recent passing. Her contributions to the books I have authored about Jimi Hendrix were invaluable. Her perspective was always illuminating and her demand for accuracy never waned. Her contribution to the Hear My Train A Comin’ documentary was immensely important, providing first-hand accounts of Jimi Hendrix history from a vantage point that no one else had. We fans owe her a debt of gratitude for sharing this information.”

“We shared a deep love for blues music,” continues McDermott. “Our conversations would always spark her to ask if I was aware how much Jimi liked obscure 45’s such as “It’s Too Late” by Tarheel Slim & Little Ann, “Suffering Mind” by Guitar Slim or the passages within Elmore James’ “Anna Lee” that Jimi would play his guitar to over and over (he wore out three copies said Faye). She will be greatly missed.”

Janie Hendrix, President & CEO of Experience Hendrix recalls, “When I met Faye, it was no mystery why she and Jimi had such a close bond. They were kindred spirits, possessing the same genuineness and zest for life. Faye had a beautiful spirit and it was like finding a long lost sister. She had such colorful stories to tell, which I loved hearing and will treasure. Over the years we developed a closeness built on joy, laughter, encouragement and a shared love for Jimi. She will be missed, but her light will never go out!”