Between February 13, 1967, and December 15 of that same year, The Jimi Hendrix Experience went into the studio to record sufficient material to stuff a double album to bursting point. Nearly thirty tracks were taped and completed, some reprising the band’s own recent releases, others documenting moments that might never occur again, still others hammering back at songs that the group wasn’t completely happy with. What is amazing about all this is that it took them less than a week of work to do it.

The sessions in question were The Experience’s five BBC Radio broadcasts, a series of sense-shattering recordings that caught the band at both its most relaxed, and its’ very best. These recordings, after all, would be heard the length and breadth of the entire nation, bringing the sound of The Experience into homes that might never have dreamed such a band existed. But they would also be aired just once or twice, and then filed away and forgotten. So, as another producer told another band, when they were faced with a similar quest: “Make it good … but don’t make it difficult.”

The Experience’s first BBC session came on February 13, five days ahead of its scheduled broadcast. Recording in Studio Two, at the BBC’s London headquarters, the band would record four songs for broadcast on Saturday Club: “Stone Free,” “Hey Joe,” “Foxey Lady” and “Love Or Confusion,” plus first-take versions of “Hey Joe” and “Foxey Lady.”

The session was unorthodox, to say the least. Producer Bill Bebb remembers the sound mixer, Peter Harwood, complaining about the feedback he was hearing, “So I opened up the talkback and started saying, ‘Er, Jimi, we’re getting rather a lot,’ when Chas leans over and says, ‘Shut up man, that’s his sound!'” Bebb shut up, but he still remembers that even with the monitors switched off, “We could still hear Jimi through the soundproof glass, and we could see the glass moving.” There were also noise complaints from the Radio 3 Concert Hall, two floors above!

Despite such problems, the band, Bebb, and Harwood (plus engineer Tony Wilson) were back at Studio Two on March 28, for a second Saturday Club recording. This time, all three tracks were first takes: “Killing Floor,” “Fire,” and “Purple Haze.”

Hendrix was scheduled to sing live vocals over an instrumental recording of “Burning Of The Midnight Lamp” on the August 24, 1967 edition of Top Of The Pops television show.  Following the host’s introduction, a recording of the Alan Price Set’s “The House That Jack Built” started playing.  Hendrix joked, “I’m sorry man, but I don’t know the words.”  A quick apology from the host, a tape change and “Burning Of The Midnight Lamp” played as originally expected.

September 1967 saw the creation of the BBC’s all-pop music channel Radio One, and The Experience—by now one of the biggest bands in Britain—were amongst the earliest guests invited to appear on John Peel’s Top Gear show on October 6. Recorded at the Playhouse Theatre in London, with Bev Phillips and Pete Ritzema, it was to prove an epochal recording.

The band recorded five songs for broadcast: “Little Miss Lover,” “Driving South,” “Burning Of The Midnight Lamp,” “Hound Dog,” and “Catfish Blues.” But it was a cut they left in the can that is most intriguing.

Stevie Wonder was also at the studio, being interviewed by Brian Matthews, and when Mitch Mitchell disappeared to the bathroom, Wonder took over his drum stool for a brief jam that included “I Was Made To Love Her.”

“Jimi was very self-conscious about doing his
vocals. He insisted on having screens put up ’round
his mic when he was overdubbing his vocals,
because otherwise Noel and Mitch would make
him laugh.”

“Hendrix I remember as being very giggly and camp,” Ritzema reflects. “He was very self-conscious about doing his vocals. He insisted on having screens put up ’round his mic when he was overdubbing his vocals, because otherwise Noel and Mitch would make him laugh.”

On October 17, The Experience were at Studio Two within the BBC’s Aeolian Hall complex, recording a session for the BBC World Service’s Rhythm And Blues show, hosted by Alexis Korner. Produced by Jeff Griffin and Joe Young, the performance opened with Korner himself joining the band for a driving version of “(I’m Your) Hoochie Coochie Man,” plus a rare performance of Bob Dylan’s “Can You Please Crawl Out Your Window?” and a suddenly aborted version of “Driving South.” As the song drew close to its conclusion, Hendrix broke a string, and Mitchell finished the performance off with a drum solo.

The Experience’s final BBC session was another marathon. Recorded on December 15 at The Playhouse, with Phillips and Ritzema again in attendance, the session opened with Hendrix messing around with a Radio One jingle, before matters got underway with Noel Redding’s fabulous lead vocal on “Day Tripper,” “Spanish Castle Magic,” “Hear My Train A Comin’,” and “Wait Until Tomorrow” followed. A second take of “Hear My Train A Comin’” was also preserved on tape.

Jimi Hendrix is pulled off the air on Lulu’s show in 1969
From BBC Arts – BBC.co.uk

The Experience would make one final appearance on the BBC on January 4, 1969 when the group appeared on the popular Happening For Lulu television show.  After a blistering rendition of “Voodoo Child (Slight Return)” Lulu introduced the band’s first hit single, “Hey Joe.”  Stopping mid-song, the trio broke into The Cream’s “Sunshine Of Your Love,” a tribute to the band that has just recently broken up.  Shocking the show’s producers by going entirely off-script, the live broadcast was eventually brought to a premature conclusion, and The Experience had been “banned” by the BBC.

Hendrix would not return to the BBC studios – a sad departure, but an understandable one. Had he really been “banned?” Unlikely, but it makes for great rock ‘n’ roll history.  However, he would be spending so much more time in the U.S., and his meteoric rise to fame deemed these one-off promotional sessions less relevant when he was headlining arenas and festivals. What he left behind in his time at the Beeb, however, remains as timeless as anything else he recorded, and that remains true regardless of whether or not he intended it for release. 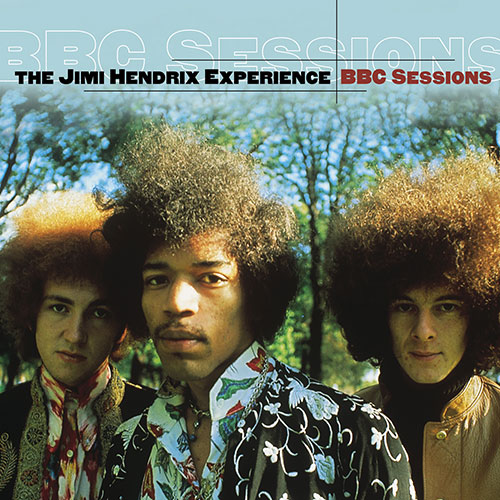 BBC Sessions is a truly “essential” addition to every Hendrix fan’s collection. Featuring more than 30 original recordings remastered from the original BBC tape archives, this collection covers all of The Jimi Hendrix Experience’s British radio and television appearances in 1967 and 1969.