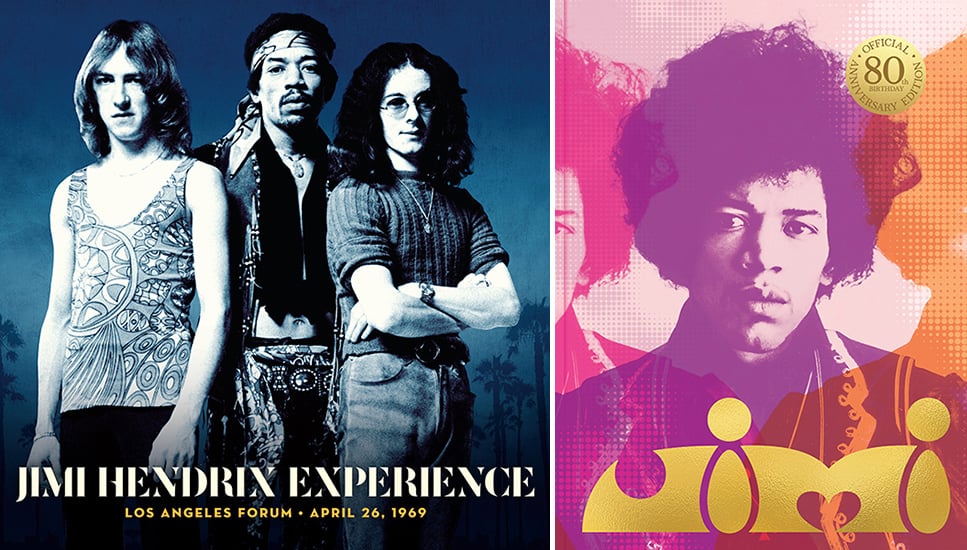 This coming week will be capped off by the release of Jimi Hendrix Experience – Los Angeles Forum April 26, 1969, a live album on CD, 2 LP set and digitally, from Experience Hendrix through Legacy Recordings. The album and related events are connected to the 80th birthday of Jimi Hendrix on November 27. The album was produced for release by Janie Hendrix, John McDermott and Kramer and will be officially released on Friday, November 18.

ZZ Top’s Billy F Gibbons will guest on Jimmy Kimmel Live on Thursday, November 17, the evening before the album’s release. He’ll be sitting in with the band and playing Hendrix material using the Gibson Flying V guitar that Jimi throughout his 1970 tour, including his appearance in August of 1970 in front of a crowd of 600,000 at the Isle of Wight Festival, the largest audience of his career.  The guitar is being transported from London to Los Angeles from the collection of Hard Rock International under the auspices of Chase McCue, Hard Rock’s Director of Memorabilia. Gibbons’ connection to the enduring legacy of Jimi Hendrix is highlighted in the liner notes he wrote for Los Angeles Forum April 26, 1969.  The Moving Sidewalks, his pre-ZZ Top band, had shared a number of concert bills with the Jimi Hendrix Experience and he and Hendrix struck up a friendship.  Gibbons was in Los Angeles in April 1969 when the Experience were to perform and was invited to the performance.  Billy chronicled that “Experience” in an essay titled “I Was There” which is included in the album.  He recalled, “In those days VIP seating was yet to be, so we angled over to side-stage. I stood standing with arms folded and I remember Jimi looked over and gave me a nod, the same nod that he gave me the first night that we played together when the Moving Sidewalks had to flesh out their opening set with “Purple Haze” and “Foxey Lady.” His enthusiasm for the performance abides to the present day as he noted, “The Jimi Hendrix Experience lit the house up and tore it right down!”

The album also includes an essay crafted by former LA Times music reporter Randy Lewis.  Lewis recounts the early history of The Forum as a music venue, with the Hendrix show being one of the first few produced there.   A new video, available today from Experience Hendrix, underscores how Jimi not only revolutionized the rock guitar, but he also rewrote the book on the concert industry.  The video debuted via Pollstar, the trade publication that is known as the bible of the concert and live music industry.  Famed promoter Larry Vaughn explains how Concerts East and Concerts West were created by Jimi Hendrix’s attorney and manager to promote the guitarist’s concerts in America.  The artist would now reap the lion’s share of the money earned from live performing and this model would later serve Led Zeppelin, Bad Company and many others as rock touring moved from college gymnasiums to sports arenas such as The Forum and New York’s Madison Square Garden.

Janie Hendrix and John McDermott are authors of JIMI, a new visual celebration of Jimi Hendrix’s career and legacy out now from Chronicle Books’ Chroma imprint. This visually stunning and specially curated deluxe hardcover book is a comprehensive, graphic salute Jimi Hendrix with rarely seen photos and candid images, dedications, and inspirational anecdotes, giving fans an inside look at Jimi’s groundbreaking musical artistry. A reception for the book and its authors is set for LA’s Mr Musichead Gallery on Thursday night, November 17.  Billy Gibbons, immediately following his appearance on Jimmy Kimmel Live, will also be on hand to autograph his Los Angeles Forum liner notes.

Tickets to the reception are available now at
https://www.eventbrite.com/e/experience-jimi-hendrix-book-lp-release-w-janie-hendrix-john-mcdermott-tickets-445332229687