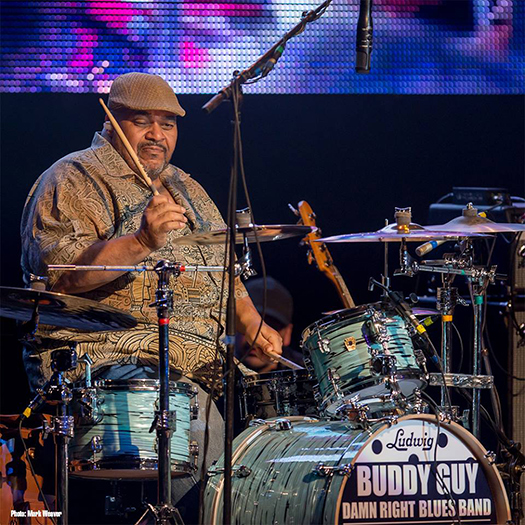 “Tim was the heartbeat of the band in so many ways, both on and off stage!” recalls Janie Hendrix. “His powerful beats set the pace, his distinguished style resonated from fedora to wingtips. He was solid as a performer and a person. Tim will remain forever in our hearts. As Jimi would say, ‘Play on, drummer!'”

As a small child, Tim “Awesome” Austin started beating out rhythms on old empty cans from the paint factory behind the house, using tree branches for drum sticks. After seeing James Brown and Jackie Wilson perform at Chicago’s Regal Theatre, Tim was inspired beyond belief and finally got his first real set of drums in 1964. When he was only 20, this young prodigy was discovered by the legendary Pops Staples, and he played for the Staple Singers for 29 years, eventually becoming their band leader.

The list of performers Tim played for was like a who’s who in the world of Blues. Otis Rush, Eddie “The Chief” Clearwater, Luther Allison, James Cotton, Junior Wells, Big J. McNealey, John Mayer, Warren Haynes, Carlos Santana, Nellie “Tiger” Travis, Billy Branch, Sugar Blues, Phil Guy… and the list goes on and on. His handiwork can be heard on many of the world’s finest Blues performers, past and present.

“Tim was wonderful to work with,” remembers John McDermott. “A thunderous drummer whose humor offstage was just as wicked. He will be greatly missed by us all.”