STAR SPANGLED BANNER – Jimi Hendrix At Woodstock: The Anthem of a Generation

Jimi Hendrix’s performance of “Star Spangled Banner” at Woodstock was a turning point in the history of the counter-culture movement. As a summing up of one of the most volatile eras in the nation’s history, his adaptation of our national anthem has entered our cultural lexicon as perhaps the most powerful musical touchstone of the era, a zeitgeist of expressiveness.

Galvanized by conflicting struggles between the powers sanctioning (among other things) the war in Vietnam and those advocating alternative ways of being, “SSB” can, in a sense, be seen as the culmination of Hendrix’s artistic vision, as well as one of the high points of his unsurpassed technical achievement.

When Hendrix and his band took the stage at Woodstock on August 18, 1969, circumstance had altered the nature of the intended performance. Originally booked to close the festival the previous night, schedules had, by this time, gone the way of the fences that once enclosed Max Yasgur’s farm. It would be some ten hours after he was originally slated to play that Hendrix would finally perform on a soggy Monday morning before a crowd that had dwindled from a weekend high estimated at 400,000 to a comparative paucity of 30,000. By this time, the festival grounds were a wasteland of mud and debris. Cold, hungry, and lacking the most basic amenities, those who waited for Hendrix to perform were to become witnesses to one of the pivotal moments of the tumultuous ’60s.

The group assembled on stage with Hendrix was a one-off appearance by an expanded ensemble that Hendrix called Gypsy Sun & Rainbows and featured the likes of Mitch Mitchell on drums, Billy Cox on bass, Larry Lee on rhythm guitar, Juma Sultan and Jerry Velez on percussion and Hendrix leading the way with guitar and vocals.

And while their performance was rough around the edges, given the conditions under which they were forced to play, the set was commendably strong. Lack of organization prompted Hendrix to concentrate mostly on extended jams, and his playing was characteristically excellent.

In spite of its subsequent canonization, according to Jerry Morrison, a music industry gadfly who was friends with Michael Jeffrey, “Star Spangled Banner” almost wasn’t performed at all. Speaking to journalist Jerry Hopkins, Morrison recalled, “There was an argument between me and Mike Jeffrey (then Hendrix’s manager) over whether or not Jimi should play “Star Spangled Banner.” Mike said no. It had caused a riot in Dallas, and he said that things were bad enough already here without making them worse. I disagreed. Because Jimi was going on as the final act, I thought he had to play the national anthem. It didn’t matter. When Mike left the house, I told Jimi to go for it.”

Hendrix undoubtedly would have played “Star Spangled Banner” with or without Morrison’s prodding, as the anthem had become a fixture on The Jimi Hendrix Experience’s concert setlist since August 1968.

While his segue into the song after a lengthy rendition of “Voodoo Child (Slight Return)” seemed almost incidental, his execution underscored the fact that he was fully aware of the significance of it being performed in the midst of a cultural milestone such as Woodstock. A model of compressed expressionism, “SSB” was a work that evoked the chaos of the times in a manner which was frightening, apocalyptic, and, at the same time, exceedingly freeing and optimistic; as a composition it perfectly encapsulated the multitudinous forces colliding at the end of the 1960s. Its stunning interpretation of that particular era rendered it timeless enough to be as relevant today as it was then.

The sounds Hendrix drew from his Fender Strat were literally an aural recreation of war. In between the machine-gun fire, bombs dropping, smoke billowing from napalm blazes, and a wrenching undercurrent that evoked the agonizing polarity which tore our country apart and destroyed Vietnam, Hendrix treated the song with surprising reverence. Without the pyrotechnics, Hendrix’s approach to the lead notes was surprisingly unspectacular-a fact that heightened the tension of the song when juxtaposed with his inimitable exercises in distortion. As much a statement about his feelings about war, “Star Spangled Banner” was a perfect vehicle for Hendrix’s complex vision of incorporating stunning technical work with completely new ideas in feedback.

One recollection of the “Star Spangled Banner” performance appears in Charles Shaar Murray’s Hendrix book Crosstown Traffic. For Shaar Murray, Hendrix’s adaptation of the national anthem, “is probably the most complex and powerful work of art to deal with the Vietnam War and its corrupting, distorting effect on successive generations of the American psyche. One man with one guitar said more in three and a half minutes about that peculiarly disgusting war and its reverberations than all the novels, memoirs, and movies put together.”

Murray adds, “It was both a performance which no other living musician would have been capable of conceiving or executing, and a graphic demonstration that Hendrix’s artistic ambition had grown in proportion to-but in a radically different direction from-his immense popularity.”

To understand why no other living musician would have been capable of conceiving or executing this work, it is necessary to look at the ironic twists Hendrix’s life took, since the genesis of “Star Spangled Banner” is as much biographical as it is musical.

While Hendrix served as reigning crown prince of the hippies at the end of the ’60s, a brief but crucial part of the early decade was spent in less glamorous confines as a member of the 101st Airborne stationed at Fort Campbell, Kentucky. In retrospect, the notion of Hendrix as a soldier seems comical, his stint as a paratrooper was crucial to his artistic development. In later years Hendrix would speak animatedly about the adrenaline rush of jumping out of an airplane and free-falling through the sky. The combined terror and exhilaration, the enormous whooshing sound followed by the strange, placid calm of floating down, were experiences he wanted to recreate in musical terms. That he succeeded in doing so long before adapting “The Star Spangled Banner” is clear; yet by fusing this sonic rendering with his version of the national anthem, he found a sound large enough to accommodate the range of his vision, and, in doing so, created one of the musical wonders of the age. Contextually, it would be hard to imagine a more unified coalescing of ideas.

More mundane, but no less relevant, was Hendrix’s attitude towards the war. While people presume “Star Spangled Banner” to be defiantly anti-war, it is no such thing; such a notion limits the scope of the piece. Friends were often surprised by Hendrix’s pro-war stance on Vietnam. Eric Burdon recalled that when Hendrix arrived in England he spoke fervently about the need for the United States to subdue Chinese Communism before it overtook the world. It is important to remember that Hendrix had been on both sides of the fence, experiencing attitudes toward the war as diametrically opposed to one another as could be. It’s not hard to imagine Hendrix thinking less about the hippies congregated at Woodstock than his old friends from the 101st Airborne (many of whom went straight from Fort Campbell to the jungles overseas to witness combat first-hand) when performing the song. At the same time, Hendrix possessed a pacifistic nature that certainly contributed to the work’s radiant objectivity.

Hendrix’s own comments about the performance are characteristically understated. Speaking with Dick Cavett several weeks after Woodstock, he said simply, “I’m an American so I played it. They used to make me sing it in school, so it was a flashback,” a statement that says more about Hendrix’s modesty than the grand sweep of the song.

Subsequently, “Star Spangled Banner” has, by virtue of its undeniable power and cultural connotations, become one of the defining pieces in popular music. Hendrix’s interpretation of the national anthem may have opened the door for other musicians to interpret a song that had previously been considered off-limits.

Today, the national anthem is played in stadiums and schools throughout the US, and each performance is subject to the musician’s own interpretation, and more often than not, it is heavily inspired by Hendrix’s adaptation. Stevie Ray Vaughan once interpreted Hendrix’s version before a baseball game, and U2 included it on their “Rattle And Hum” tour and have a host of other performers. 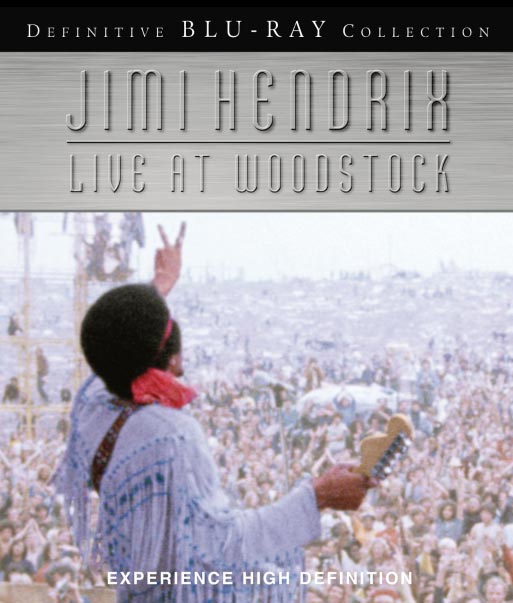 Jimi Hendrix Live At Woodstock stands as the definitive record of one o Jimi’s most celebrated performances.  Featuring all of the existing film footage from Jimi’s unforgettable August 1969 Woodstock concert newly re-edited and presented uninterrupted and in its original performance sequence.  Jimi Hendrix Live At Woodstock features never before seen versions of “Foxey Lady,” “Message To Love,” “Hey Joe,” “Spanish Castle Magic” and “Lover Man.” The audio soundtrack now includes a new, previously unavailable 5.1 and 2.0 stereo soundtrack mixed by Eddie Kramer, Jimi’s original engineer. Available as a 2CD or 3LP set, Live At Woodstock is also available on DVD and Blu-ray from Authentic Hendrix, and is now available via streaming from The Coda Collection.

In an interview with Rolling Stone’s David Fricke, Living Colour’s guitarist Vernon Reid points to his two favorite Jimi Hendrix guitar solos – “Star Spangled Banner” (Woodstock) and “Machine Gun” (Band Of Gypsys), explaining: “Woodstock was the end of the hippie era.  And Hendrix was the man at the apex.  It was like he was at the top of the mountain.  That solo is Martin Luther King’s ‘I Had A Dream’ speech on guitar: ‘I may not get there with you, but I have seen the mountain.’”

More than that, “Star Spangled Banner” is an interpretive masterpiece whose breathtaking majesty is indicative of the peerless vision possessed by its creator. By mirroring an epoch that seemed enormous for even less-restrictive forms of expression, Hendrix not only validated his vision, he clarified and expanded ours as well.