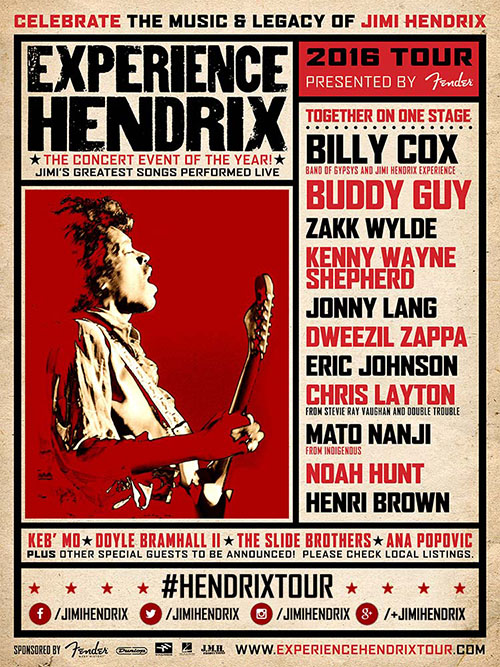 The Experience Hendrix Tour, a multi-artist celebration that is set to return in February and March of 2016, has just announced the inclusion of more outstanding guest musicians who are to play select dates. These special concert performances involve artists joining together to celebrate the musical genius of Jimi Hendrix. This next edition of the Experience Hendrix Tour will encompass twenty seven performances this coming February and March, stopping in more than two dozen cities, with focus on the east coast, midwest and southern states.

Three-time Grammy-winning blues singer/guitarist Keb’ Mo’ will help kick off the Experience Hendrix Tour by performing at the Florida and Georgia dates. The Compton, CA-born musician can be considered a guardian of the Delta blues sound, but has always added his own style to traditional forms.

Barbara Lynn, a left-handed guitarist/singer/songwriter, like Jimi Hendrix himself, and also born the same year as Jimi, is best known for her 1962 hit “You’ll Lose a Good Thing,” as well as “Oh, Baby (We Got a Good Thing Going),” covered early on by the Rolling Stones. The east Texas native will make her sole Experience Hendrix Tour appearance on March 5 at the Bayou Music Center in Houston.

Another left-handed Texas guitarist/singer who will be participating in the tour is Doyle Bramhall II. A solo artist who was also Eric Clapton’s guitarist for many years, his resume includes collaborations with B.B. King, Elton John, Sheryl Crow and many others. Bramhall II will be playing every Texas date as well as New Orleans, St. Louis, Milwaukee, Detroit and Chicago (March 3-12).

Ana Popovic and Joanne Shaw Taylor have a lot in common. They are both up-and-coming blues singer/guitarists from Europe (the former from Serbia, the latter from England). Taylor, who was discovered at the age of 16 by Dave Stewart of the Eurythmics, is a winner of multiple British Blues Awards, including Best Female Vocalist (2010, 2011) and Songwriter of the Year (2011). New to the tour, Taylor will be performing at the Jacksonville and Atlanta dates. Popovic, now a resident of Memphis, has been on a few Experience Hendrix Tours in the past, including 2014, where she dazzled audiences with her rendition of “Can You See Me.” She can be seen in St. Louis, Milwaukee, Detroit, Chicago and Cincinnati this time around.

Rock and blues guitar prodigy Quinn Sullivan first gained national attention when he appeared on The Ellen DeGeneres Show at the age of six. Soon after, Buddy Guy took Sullivan under his wing, and now at 16, with two albums and multiple tours under his belt, the singer/axeman has joined the ranks of fellow Experience Hendrix Tour musicians Jonny Lang and Kenny Wayne Shepherd, who also began their careers at a very young age. Sullivan will play the last three dates of the Tour – two in his native Massachusetts, and one in New Hampshire.

Jon Butcher’s musical career goes back to the 1970s, when his band Jon Butcher Axis opened for KISS among others. Having released several albums of his own, the guitarist often draws comparisons to Jimi Hendrix, which makes him a natural fit for the Experience Hendrix Tour. Like Quinn Sullivan, Butcher will perform at the final three dates (March 23-25).

Both Calvin Cooke and Chuck Campbell are known for being members of The Slide Brothers – a four-man steel guitar group that shifts seamlessly between gospel and secular blues music traditions. Cooke is hailed today as the most influential living pedal steel guitar master within the Sacred Steel tradition, and has been called “the B.B. King of gospel steel guitar.” His sole Experience Hendrix Tour appearance will be at the Fox Theater in Atlanta on Feb 27. Campbell has been playing lap steel guitar since the age of twelve and is renowned for his innovative approach to the instrument. He will play the Experience Hendrix Tour dates in Northfield, OH, Syracuse, NY Wallingford, CT and Brooklyn, NY (March 15-18).

Jimi Hendrix was a pioneer in both rock and blues, and expanded the possibilities of what could be achieved with the electric guitar, forever altering the course of music history. Likewise, the Experience Hendrix Tour is developing a rich history of its own. By 2004, the first Experience Hendrix Tour came to fruition with a three-date string of shows on the west coast, starting in Hendrix’s hometown of Seattle. By 2008, the Experience Hendrix Tour had become a full-fledged, coast-to-coast expedition that continues to date, without showing any signs of slowing down Audiences are presented the opportunity to see great artists paying homage to Hendrix and collaborating with each other in ways they’d never do in their own live shows.

More special guests to play the 2016 Experience Hendrix Tour will be added in the coming weeks. Please check www.experiencehendrixtour.com and local listings for announcements.

As in years past, Fender Music Instruments is the primary tour sponsor. Fender and Experience Hendrix L.L.C. have long enjoyed a successful relationship-an association that traces back to Hendrix transforming the Fender Stratocaster into the dominant instrument of rock and roll music.

Marshall Amplifiers and Dunlop Manufacturing, whose gear is an integral part of the tour’s backline, also sponsor the Experience Hendrix Tour together with Axe Heaven IK Multimedia and Hal Leonard.

Robert Kinsler of the Orange County Register, called the Experience Hendrix Tour “a steller event,” as well as “a special night, and a fitting tribute to a music legend, to be sure.”

John Hancock of the San Diego Reader said, “Seeing these star rockers individually is a treat unto itself, but seeing them all perform in one evening, sometimes sharing the stage with each other, is an Experience.”