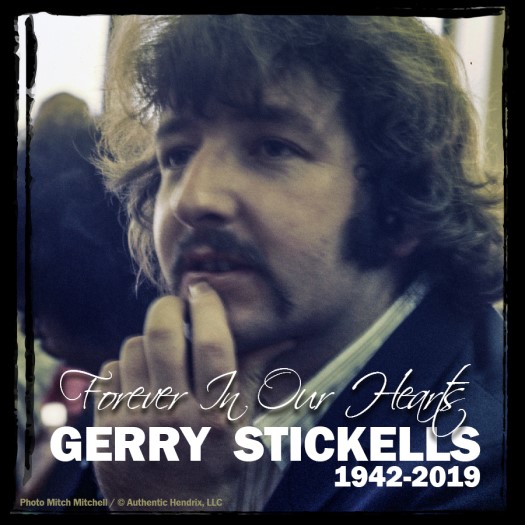 We are deeply saddened to hear of the passing of our friend, legendary Tour and Production Manager, Gerry Stickells. Forever linked inseparably with The Jimi Hendrix Experience, bassist Noel Redding encouraged Gerry to look after the group’s transportation and equipment in November 1966 when the band made their first tour of Germany in support of their debut single, “Hey Joe.” Over the course of the following four years, Gerry’s role soon expanded to encompass all of Jimi’s tour and production needs. He was Jimi’s trusted day to day road manager throughout his entire career.

Following Hendrix’s death in September 1970, Stickells continued his role in the industry, beginning with Three Dog Night before embarking on a long and successful relationship with Queen. In the aftermath of Freddie Mercury’s death, Gerry formed GLS Productions with Chris Lamb. The company became a music industry leader, handling major tours by such artists as Elton John, Paul McCartney, Steve Miller, Madonna, and many others. Gerry was credited for bringing major rock shows to South America for the first time and was hailed by artists and industry colleagues alike as one of the best Production Managers in live music over the past 40 years. Gerry paved the road on how modern music tours were completed and expanded the music and geographical horizons for all touring artists and, as a result, helped define what a “world tour” truly meant.

“I am deeply grateful to Gerry for his friendship and support for the Jimi Hendrix books and documentary projects that I have been involved with,” states John McDermott. “Gerry was always willing to help put things in proper context and share information that only someone so close to Jimi and the band would possess. Of the many times we gathered, I will never forget bringing together Mitch Mitchell and Billy Cox for an emotional reunion after Gerry had endured extensive surgery for a brain tumor. He will be greatly missed.”

“Gerry Stickells was a tireless and compassionate supporter of Jimi Hendrix throughout his career,” explains Janie Hendrix. “He looked over Jimi while they toured together; helped bring Jimi home to his final resting place in Seattle; and remained in contact with the family regularly over all the years. Gerry will be greatly missed and fondly remembered for his support and generosity towards Jimi and the Hendrix family.”