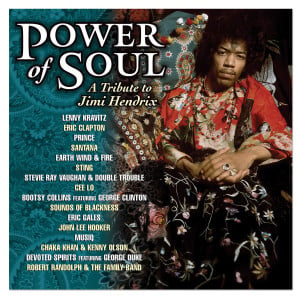 Power of Soul: A Tribute to Jimi Hendrix

This star-studded musical tribute to Jimi Hendrix is highlighted by contributions by artists from rock, R&B, blues and funk. Each of these artists bears witness to Hendrix’s imprint on their own music. From the contemporary R&B stylings of Musiq to the deep country blues of John Lee Hooker, Jimi’s creative spirit-the pure inventive freedom he drew upon to originate these signature songs-stands undiminished.

While Power Of Soul was created to pay homage to Jimi’s influence on popular music, another very important component of this project-wholly embraced by the album’s executive producers and participating artists-was the commitment to continue supporting a scholarship fund in Jimi Hendrix’s name at the United Negro College Fund.