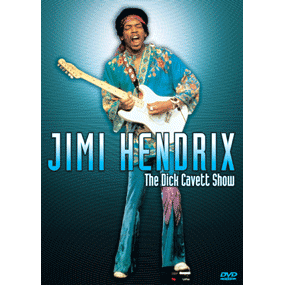 The complete collection of Jimi Hendrix’s celebrated appearances on The Dick Cavett Show is now available for the very first time.
The Dick Cavett Show represented Jimi’s US network television debut and this special collection features complete live performances of “Izabella”, “Machine Gun”, and “Hear My Train A Comin’. Jimi’s insightful interviews with Cavett touched upon a variety of personal and professional issues ranging from his stint as a US Army paratrooper to his celebrated rendition of the “Star Spangled Banner” at the Woodstock Festival. These conversations with Cavett helped reveal the humor, passion, and intelligence of the man behind such rock classics as Are You Experienced and Electric Ladyland.

This deluxe edition also includes a new, behind the scenes documentary created especially for this release. The documentary provides the inside story of Hendrix’s two unforgettable Cavett appearances-as well as the one he missed at the last minute-a special Woodstock program which aired just hours after the conclusion of Jimi’s legendary performance at the festival site. The program features interviews with drummer Mitch Mitchell and bassist Billy Cox from the Jimi Hendrix Experience, as well as new commentary from Dick Cavett.

In addition to the sixty-minute documentary, both of Jimi’s Cavett appearances are presented individually, in their entirety, complete with each program’s opening monologue.