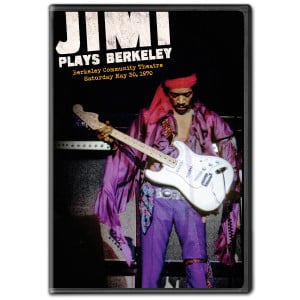 This special, expanded edition of Jimi Plays Berkeley showcases some of Jimi’s finest ever performances filmed over two concerts at the Berkeley Community Theatre on May 30, 1970. The film documented the political unrest and student uprisings in Berkeley juxtaposed against such legendary Hendrix live performances as “Johnny B. Goode,” “Star Spangled Banner,” “I Don’t Live Today” and “Purple Haze.”

Also includes:
A new, digitally restored transfer from the original 16mm negative. More than fifteen minutes of newly discovered, previously unseen documentary and performance footage of such classic songs as “Voodoo Child (Slight Return),” “Machine Gun” and “Hear My Train A Comin'” not featured in the original film release.